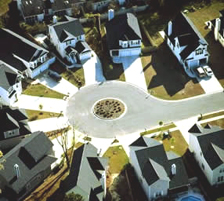 It’s the end of the road for the cul-de-sac. New regulations will greatly reduce the number of the bulbous-ending streets allowed in neighborhoods, and Virginia home builders say the move will hamper their business. The requirements were passed last month by the Commonwealth Transportation Board, which establishes policy for Virginia’s transportation system.

The regulations require the secondary roads found in subdivisions to be through streets that provide connectivity to primary roads and adjacent neighborhoods. Subdivisions that do not meet the requirements will not be admitted to the state road system and not eligible to receive maintenance funding from the Virginia Department of Transportation.

In Virginia, developers of subdivisions plan and build the roads within the neighborhood. Once they are finished building, the state accepts the roads into the highway system and they are maintained by public dollars. Neighborhoods with too many cul-de-sacs and too few connections would not be admitted into the state system under the new rules.

Most developments may be approved under existing requirements until July, according to VDOT.

Gov. Tim Kaine led the effort to approve the regulations, which state officials say will improve safety and save money on maintenance. But Michael Toalson, executive vice president of the Home Builders Association of Virginia, said the new regulations would make building new neighborhoods more expensive for developers.

“There will be shorter streets and more intersections. That makes fewer lots available for homes and it increases the cost of development because storm water management and signalization at intersections is expensive,” Toalson said.  He said the regulations would substantially reduce the number of homes that can be built on a tract of land, which means the cost of land is divided by fewer homes.

Toalson said that adapting to the new regulations means the subdivision model that has dominated the Richmond metro area will effectively come to an end.

“Under this regulation, you could not build a Brandermill or most other highly desirable large developments,” Toalson said.

Under the requirements, new secondary roads must meet a certain “connectivity index,” which is a ratio of road segments to intersections. The higher the ratio the better, encouraging builders to lay out subdivision streets in a way that conform to a grid. The rules also call for narrower roads, reducing the allowable width by as much as seven feet.

“That basically requires everything to take on the look of the Fan, where everything is connected,” Toalson said. 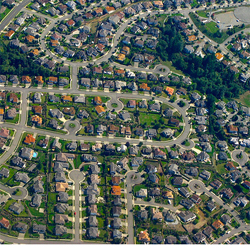 He said the openness could expose more suburban residents to crime, because it would be easier for criminals to get in and out of neighborhoods. Part of the allure of the cul-de-sac is its privacy.

“Every time a new development comes online, those are the first lots selected. In the future, there is not going to be any of those,” Toalson said.

Homes located on a cul-de-sac will become a hot commodity, because the requirements will cap the supply of such homes at their current level, said one real estate broker in a story by Fox Channel 5 in Washington.

“The main reason people are pushing for this now is to create more flexibility. With connectivity, you have options as to how you get in and out of neighborhoods,” Gulak said.

The cul-de-sac started its rise to prominence in the 1940s, but as they proliferated traffic congestion has become a growing problem, Gulak said. He said the concern that increased connectivity would direct more traffic through residential neighborhoods is a legitimate one, but he thinks creative planning is capable of addressing the issue.

More Reading:
Washington Post – In Virginia, Vision of Suburbia at a Crossroads

I had heard about this somewhere before. I think it’s an ill-conceived idea and will take away the appeal of the suburbs. I’m honestly really surprised this passed so quietly and without incident or debate. I understand the wanting to save VDOT money by not making them plow streets that are wide and have to widen collector roads because there are fewer points of access, but I really think this is a terrible idea.

People like to live in cul-de-sacs because of the privacy and the neighborhood feel. Kaine is taking that away from people because he doesn’t want to spend money on road maintenance. The connectivity through neighborhoods will encourage commuters to use neighborhood roads as shortcuts to save time. That means the commuters won’t be driving through these neighborhoods at 25 mph, rather, at 40 or 45 mph. Virginia is going to have to shell out millions of dollars to settle the first lawsuit filed by the parents of the kid that’s killed by a driver using the neighborhood as a shortcut… Read more »

Mr. Gulak and Governor Kaine miss the point about cul-de-sacs. They are built because the free market has spoken and that is what most homeowners desire. These new regulations come from the flavor of the day “new urbanism” and they seek to have the government plan our lives down to the minutia of how our neighborhoods can be developed. The connecting through streets will also be narrowed under this new legislation meaning less road width for cars and kids riding their bikes. Roads can be narrowed from an acceptable 40 ifeet width down to 24 to 29 feet in width.… Read more »

One other point that I forgot the mention is that the developers of some new communities may decide to keep the roads private and assess the road maintenance fees as part of the homeowner’s dues. This works in a rural setting where the road is gravel and there may be just a few homes. Imagine a 100 home community after a bad winter with potholes starting to appear. A pizza delivery driver comes into the community, hits a pot hole and ruins his front end suspension. He may sue the association and guess who pays if he wins that lawsuit.… Read more »

“People like to live in cul-de-sacs because of the privacy and the neighborhood feel. Kaine is taking that away from people because he doesn’t want to spend money on road maintenance.”

Yes, but by choosing cul-de-sacs, they are imposing costs on everybody in the state in increased traffic and wear&tear on nearby roads.

And it’s time that stopped.

The cul-de-sac is no more free market than a highway. It’s a government subsidy through and through. It’s just that this particular subsidy is at the expense of everyone else.

We can’t afford to subsidize a certain few’s tastes at the expense of the greater good.

“…the developers of some new communities may decide to keep the roads private and assess the road maintenance fees as part of the homeowner’s dues.” Exactly. If people want cul-de-sacs so much, this is how it should work – THEY should pay the added costs, rather than those of us who live on connected streets subsidizing their tastes. VDOT is not saying you can’t have cul-de-sacs. They’re saying other Virginia taxpayers are not going to pay for your cul-de-sac for you. “Additionally the cost of a new home will rise perhaps as much as $20,000+.” You seem quite proud that… Read more »

I love how some homebuilders use the rhetoric of free markets and individual choice to argue for the the continuation of government subsidies on their own subdivisions, in the form of free public maintenance for semi-private roads. Most lobbyist at least have the sincerity to call government assistance for what it is, and present the case for why the rest of us should be spending our money in such a way.

Anything to turn sprawl into something better I support. Why can’t we build towns like we used to? With a tightly connected grid? Those old towns are popular and more desirable than any cruddy subdivision some developer can conjure. We can’t build those anymore because it is illegal. Thank god people in charge are beginning to come to their senses about the terrible built environment we have surrounded ourselves in these past 50 years.