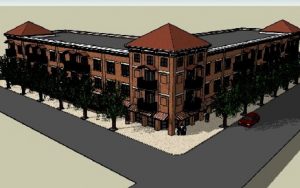 A mid-rise building for residential and retail use has been proposed for the northeast corner of Cary and Meadow streets in the Fan.

A BP service station and coin laundry currently operate at the site, but West Cary Street Planning Committee chairman Ed Eck has produced a plan to build a three- to five-story residential complex with street level retail space on the site.

“Right now, the committee’s number one priority is to develop the corner where the service station is,” Eck said.

The West Cary committee is a group of residents and businesses that have worked to improve conditions along the five-block stretch of Cary Street east of Meadow Street for the past 18 years.

There are two designs for the building, one an L-shaped layout and a higher density U-shaped layout. The building would add between 65 and 84 residential units and include street level retail. The estimated construction cost would be between $9 million and $11 million.

Eck said he has met with the property owner, who he said is receptive to selling. A possible purchase price wasn’t disclosed, but it last changed hands in 2005 for $950,000 according to city records. The city assessed the property at $618,000.

The search is still on for a prospective buyer.

Eck is the head of Eck Enterprises, a real estate company that owns a large share of properties in the uptown area along Main and Cary streets west of Virginia Commonwealth University. Eck said his company isn’t interested in pursuing the project itself because there is “enough on its plate.”

The company has five projects under construction that are a mix of residential and commercial, all within a few blocks of each other. The company owns about 100 residential units and 76 commercial spaces, with only about five vacancies.

Eck offers a simple answer as to how he manages to keep his vacancy rate low and how he continues to build in a down economy: VCU.  He said the growing university creates a strong demand for housing in the area, a demand his company has successfully capitalized on.

As for the proposal for Cary and Meadow, Eck said he is confident a developer will come along as market conditions begin to improve.

“I think at this point making anything happen is very difficult,” Eck said.

He said it probably won’t be until early 2010 before the development starts. In the meantime, Eck said he will continue to lay the groundwork by rallying community support and seeking assistance from the city.

“For the development across the street, the city negotiated purchase contracts and created request for proposals,” Eck said. He said the city could offer similar assistance for this project.

The property across the street is the Lofts at Cary Place, which was completed in 2007. The three building complex holds 14 residential lofts and 14 commercial spaces. That project was developed by East West Partners, with the cooperation of the Richmond Redevelopment and Housing Authority and the neighborhood planning committee.

The five-block stretch, beginning eastbound on Cary, has been a designated Residential Redevelopment and Conservation Area since 1996. Such districts are eligible for loans and other incentives from the Richmond Redevelopment and Housing Authority. They are also the focus of the Authority’s efforts to remove blight and revitalize neighborhoods.

Through the West Cary committee, Eck facilitated the rezoning of the corridor from industrial to residential and commercial. Over the past decade, significant construction and redevelopment projects have occurred, enhancing the quality of life and aesthetics of an area Eck calls a gateway to VCU and downtown.

Read more about past development here.

This will be great…when something concrete happens. I don’t really get it though. Mr. Eck and committee have a plan of development and a willingness from the owner to sell, but no buyer or lender (this will be TOUGH without tax credits) to do the development? I guess this is a good way to generate press and interest though…to let the public know that this rough corner is ready for someone to step in. I imagine that it’ll help marketing efforts for the two new projects next door (Cary Mews and Townes at Cary).

Interesting. This gas station has had a troubled past, so I would not be sad to see it go. But I worry that the trouble will move a few blocks over to the gas station on Main.

Now I’ll have to walk all the way to Rennie’s to buy crack rock.

I was gonna make a joke about the murders there and the overpriced condos accross the street but Marion B’s one liner had me luaghing out loud. Nice work.