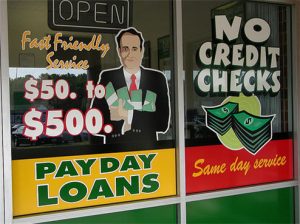 Cruising down Broad Street between Virginia Commonwealth University and suburban Short Pump, you’ll see a string of businesses with names like Cash Advance, Cash-2-U and Fast Payday Loans. They’ll lend you money until your next paycheck – at interest rates critics call exorbitant.

The 23230 Zip code has one of the highest concentrations of payday lending stores in Virginia, with almost one location for every 1,000 residents. The area is among the poorer sections of metro Richmond, with a median household income about $10,000 below the state average.

Until last year, such businesses could charge $15 for a two-week $100 loan – amounting to a 391 percent annualized interest rate. The General Assembly capped the rate at 36 percent, making the fee for a two-week loan $1.38.

So some payday lenders started offering a different kind of loan, called an open-ended loan, which is not closely regulated. This year, the General Assembly responded by passing a law prohibiting payday lenders from providing open-ended loans. On April 8, legislators approved Gov. Tim Kaine’s recommendation that the law take effect immediately.

The result: Several payday lenders – such as Check ’n Go and Allied Cash Advance – are leaving Virginia. Advance America, which operates the Cash Advance Centers of Virginia, is on the ropes, too.

“The 36 percent rate cap would put us out of business,” said Jamie Fulmer, spokesman for Advance America, the nation’s largest payday lender. “We would only make $1.38 per two weeks – less than 10 cents a day. We wouldn’t be able to pay our workers or landlords.”

Some see the demise of payday lenders as inevitable.

“People who have stocks in these businesses have seen the regulatory climate is changing, and so it’s not a smart place to put long-term stock money into,” said Stephen Graves, a geography professor and payday loan expert at California State University at Northridge.

“I think there will not only be a decrease in the rate of growth, but I think there’s a chance that the industry will be eliminated all together,” he said.

Good riddance, say payday-loan critics such as Dana Wiggins of the Virginia Poverty Law Center. She says such loans trap consumers in a cycle of debt: “People become dependent on them.”

LaTonya Reed of the Virginia Interfaith Center for Public Policy agrees.
“It’s our essential belief that it is unacceptable to charge excessive amounts for loans based on the teachings of various traditional faiths,” Reed said.

However, proponents for the industry argue the opposite: that payday lenders provide a valuable service to average Americans who find themselves in unexpected financial binds.

“We focus on high-population retail areas near where citizens work, live and shop,” Fulmer said. “It’s the mainstream middle class who from time to time need support.”

Graves has found a similar pattern among payday lenders in other states.

“They locate themselves among the desperate, and that’s what makes them predatory,” Graves said. “If they were evenly distributed, and they were a product that everyone could enjoy, then their site-location strategy would be to spread out.”

CNS analyzed the location of the 598 payday loan stores registered in Virginia as of April 7. The analysis examined the number of payday lenders by Zip code and by Zip code tabulation area. (A ZCTA is an area based on the first three digits of a Zip code.) The analysis also included income and poverty data from the U.S. Census Bureau. A map of the state’s payday loan locations is available here.

Overall, Virginia had about eight payday loan stores for every 100,000 people. The state’s median household income was $46,677, and 9.6 percent of Virginians lived in poverty, according to the latest census data.

The 232 ZCTA, which encompasses Richmond, had about 11 payday loans stores per 100,000 people for a total of 55 stores. The median household income there is $41,342 and more than 12 percent of residents live below the poverty line.

Areas with the most payday lenders per capita were much poorer than the state as a whole:

The pattern held true for Zip codes, too. For instance, 29 Virginia Zip codes had more payday lenders than banks. The Census Bureau had demographic data on 23 of those Zip codes (the others were newly created). Of those 23 Zip codes, 21 had a median household income below the statewide median.

The opposite end of the spectrum is also telling: High-income areas had few payday lenders. For example, the 221 and 201 ZCTAs – swaths of Northern Virginia with median household incomes of almost $78,000 – each had about three payday lenders per 100,000 residents.

“They’re not in my neighborhood, I know that,” Graves said. “And I’m a white guy from the middle class.”

“Those are the heaviest concentrations in any state almost without fail,” Graves said. In most states he has studied, the “Zip code with the highest concentration of payday lenders was adjacent to a military base. How could you say you’re not targeting the military?”

In Virginia, Zip code 23452 had the most payday lenders: 14. That’s next to Oceana Naval Air Station in Virginia Beach.

In 2006, the federal government enacted a law to prohibit lenders from making loans in excess of 36 percent interest to military families. Congress was responding to allegations that payday lenders were preying on military personnel.

But payday lending operations maintain that they are not targeting specific groups.

“That’s an allegation in which the facts of the matter don’t match,” Fulmer said.

He characterized the average payday loan customer as a homeowner with a middle income, a high school diploma and some college experience.

The customers are people like Brenda Cherokee, who was at the CheckSmart store, 4503 W. Broad St., on a recent Wednesday. Cherokee had just made a payment on her fifth payday loan from the past year.

“I chose it over other options because it was an immediate need, and I didn’t have enough to cover the expense in my savings,” she said.

Cherokee, a nurse, said she uses payday loans responsibly and pays them off as soon as she can.

“Some people don’t,” she said. “They borrow more than they can afford, and then they find they can’t dig themselves out of that hole.”

Sara Griffith and Josephine Varnier are journalism students at Virginia Commonwealth University. They contributed this report through the Capital News Service.

[…] Advance America, which operates the Cash Advance Centers of Virginia, is on the ropes, too. CNS analyzed the location of the 598 payday loan stores registered in Virginia as of April 7 Read the original here: Va. regulations chasing payday lenders away | Richmond BizSense […]

Annoying article out of Virginia

[…] on so many levels.  Primarily because it quotes Stephen Graves,  a geography professor turned radical activist, who consistently does junk studies […]

I feel very bad for the 98 percent of people who use these businesses responsibly for needed cash or emergencies. They can’t go to a bank because the bank won’t take the risk of lending to low-income people, and now Timmy has told these businesses that they can’t charge for accepting that risk. It really is a great example, along with the efforts to take Obama’s bribe for unemployment, of how anti-business Timmy is. Keep in mind, also, the Democrats running for governor who support Timmy in these stances and are just as anti-business as Timmy is.

The “state” has a pretty dismal record of supressing the needs of the people for “their own good.” Freedom is really about making individual choices even if they are considered poor by others. For example, some play the lottery every week and some consider them less than inteligent for doing so as the odds against winning are great. By caping the allowed return to pay day lending, the state is putting the lenders out business. It is not profitable to lend for a return less than the default rate. All that has been accomplished by this act is to eliminate… Read more »

Once again, another “unbiased” media outlet fails to take into consideration the whole picture when chastizing “payday” loans — the cost of offering short term credit or the limited alternatives available to consumers when Virginia had already eliminated an important credit option for consumers, available at a fee of $15 per $100 , two-week loan. Now it is open-ended loans. Never mind that overdraft fees, NSF, ATM fees, late fees and other penalties are all on the rise and access to traditional credit sources continues to dry up like prunes in the sun. A FDIC study published in December concluded… Read more »

The reality is that those who oppose the industry will never be satisfied with any regulatory efforts to “protect” consumers. The initial argument was that payday loans were predatory because of the annual percentage rate associated with them even though they are meant to be one or two week loans. Now the argument is that these same loans are still predatory because the majority of them are stationed in areas in which people are more likely to use them. Huh? Like any business decision, the decision to build a store location is strategic and it probably doesn’t make much sense… Read more »

This is a great article that proves what is obvious to anyone who knows the communities where payday lending is heavily concentrated. Payday lenders are targeting those most likely to be unable to repay their loans. Why? Payday loans are not what we have always considered loans to be–the offering of credit at a reasonable rate after a lender has carefully considered whether the borrower is able to repay the loan. To the contrary, payday loans are merely a device to entrap a borrower who is most likely unable to repay into a long-term cycle of repeated payments to the… Read more »

I for one am glad that Virginia is taking steps to regulate and crack-down on payday vendors. I think they need to be strictly monitored because they prey on those who are financially disadvantaged. Charging exbortitant interest harms the consumer who is already in a desperate situation.