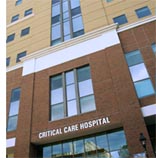 Virginia Commonwealth University said today that VCU Health System and Children’s Hospital will meet with employees of the two organizations Wednesday to discuss the possibility of merging their operations.

The two sides announced in March that they were in formal talks to explore the prospect of joint operations under the VCU Health System umbrella. The meeting with employees, to take place at 1 p.m. Wednesday, in the Children’s Hospital auditorium on Brook Road will discuss the results of those formal talks.

Read a VCU news release about the potential merger here.

The organizations have since been considering the financial, operational and programmatic issues involved in joint operations.

VCU said in its news release that:

The Richmond area is one of the few metropolitan regions of its size without a unified source of comprehensive, coordinated specialty pediatric care.

Officials note that the nation’s leading children’s hospitals are all either direct components of or closely tied to major academic medical centers, such as VCU.

The previous discussions also involved the construction of a joint full service children’s hospital. But that was in 2007. Any joint organization presently will likely be housed in existing VCU and Children’s Hospital facilities.

Neither today’s release nor the one in March included specific financial or organizational details of the talks.