The Markel Corporation said in its first public statements about its involvement with Justin French that it made a mistake in doing business with him.

“We didn’t do a very good job of vetting him,” company chairman and chief executive Alan Kirshner said in an article published in this month’s Virginia Business magazine. “We made a mistake.”

Markel had invested in 14 of French’s redevelopment projects in exchange for millions of dollars worth of historic tax credits. This summer a dispute arose between Markel and French.

French told Richmond BizSense in June that Markel refused to provide money for cost overruns. In an attempt to dissolve their partnership, French purposefully defaulted on the loans held by five different banks in order to force foreclosure. In the event of a foreclosure, the historic tax credits are wiped out. 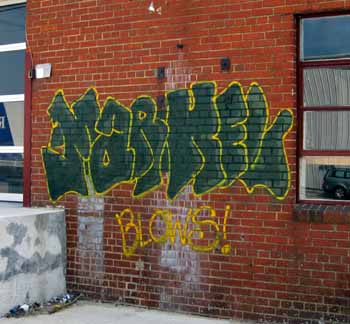 French went so far as to have “Markel Blows” spray-painted on the side of one of the properties.

Markel declined to talk to the press about the situation at the time.

Kirshner told Virginia Business that they began withholding funds from French because they started to question his operations and French refused to provide requested documentation.

Kirshner also told Virginia Business that company officials met him at a charity fundraiser for the Faison School-Autism Center, a nonprofit founded by Kirshner.

French also served on the board before the fallout spread.

Shortly after the feud became public, French became the target of lawsuits, and his office was raided by the IRS and FBI. In August, French was arrested at Richmond International Airport with more than $10,000 in cash and a one-way plane ticket. He has been unreachable since his arrest and is scheduled to make a court appearance in November on fraud charges.

Well I do hope some heads roll at Markel over this mess.

Heads roll? Really? I think you have misplaced your anger towards Markel that should be directed at Justin. The only thing Markel is guilty of is bad judgement of his character. Who do you think made the decision? People at the top who have a long history of making profitable decisions for the company and their shareholders.

I had heard through the grape vine that the buildings on Summit avenue were very well done. I think the economy was the reason for French’s down turn. We all know what lack of funds can do to a person who needs to finish a project; they go through temporary insanity. I personally have to blame the banks and/or loan companies who gave up on French. They all knew how he lived before the money was invested. They were all present at his residence for the elaborate parties he put on.

@Al Davis – Maybe, just maybe, the banks gave up on French because of all the issues that landed him in jail in the first place.

Greed is the common denominator.

There are many sides to every story; French deserves to have his day in court. If historic tax credits were used fraudulently, and if accounting was dishonest, there should be a penalty. Markel does not appear to be responsible in any way other than having bought the tax credits. When you buy the tax credits, you become a “partner” in the project for a year or two until the project gets assigned. I have done this myself and with a Richmond area project as a prudent and LEGAL tax saving measure and am now taking steps to assign my interest… Read more »

Being in the limelight, the newspaper, the “whirl of Richmond” doesn’t make you a good steward of a partnership’s direction/funds nor a REAL developer of quality real estate. That’s accomplished the old fashioned way: hard work, long hours, informed decisioning, solid books and records…interspersed with honesty. That’s what lasts long after the deals are finished. Markel may have made an error in judgement but not in intent. Markel has been a community conscious business in Richmond for two generations, they don’t blow their own horn, they should be judged with respect. Their former partner failed his fiduciary responsibility…big time…that’s why… Read more »

So bad decision-making should be overlooked on Markel’s part? Due diligence was obviously not exercised here. As far as French goes, no need to worry about him. He hasn’t even seen a fraction of what’s coming his way. The tip of the iceberg….

Justin will be in prison for years and years to come.

It’s funny how before everything blew up in French’s face, no one was complaining about anything. So long as they were making money, you never heard anything out of the banks, Markel, no one. For Markel to say they made a mistake in dealing with French is a joke because they don’t think that about any of the credits they already cashed out. Parkwood is absolutely correct, greed is the ONLY common denominator. French would have NEVER gotten this far without the cooperation of the banks and other investors. No one did their homework because they were all making money… Read more »