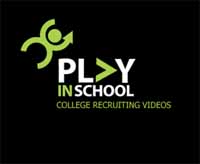 Rich Prado hasn’t been in school for almost a decade, and he’s still on the academic calendar. And he’s not a teacher.

Prado is the 32-year-old founder of Play In School, a local startup that makes recruiting videos for high school athletes.

He played second base at Varina High and at William & Mary, a school he said he would not have been accepted to if not for his bat and glove skills.

While in college, he said, he realized that he wasn’t going to be a professional baseball prospect. So he quit the team and buckled down on his business degree. After a brief stint teaching sports marketing classes at Hermitage High, Prado became a professional business owner.

He recently sat down with BizSense to discuss his startup and how he handles parents who think their kid is the next Cal Ripken.

Richmond BizSense: Who are your clients? Are they potentially any high school athlete?

Rich Prado: I work with a whole number of types of kids; either their academics allow their game to continue or their athletics allow them to get a better education. I would never tell a parent I could guarantee anything. But if the kids have strong grades and are good athletes, there’s a spot out there.

RBS: But you’re not likely to land one of the nation’s top recruits as a client, right?

RP: Michael Vick probably didn’t have to pay somebody to make highlight tapes for him.
[Top Division 1 prospects] — that’s like 1 to 2 percent of the country. The other 98 percent have to promote themselves.

RBS: How do you sell your concept? Is it tough to persuade parents to part with the money?

RP: It’s all about talking moms and dads through the process. The best way to describe it is as a video resume. I compare the recruiting process to a job search. That’s usually when it clicks for the parents. Video is never meant to get a kid signed. It’s meant to get coaches to come see you play. A resume isn’t to get you hired. It’s to get you an interview.

I’m not an impulse purchase. I cost about half the cost of books for one semester in college. My kids average about $70,000 [in scholarship money] over four years. This is an investment, and I try to position it that way for moms and dads. The return on investment has been incredible.

RBS: It seems like startup costs wouldn’t be too high for a service like this. What did you need starting out?

RP: Some software, some cameras and the gift of gab for talking to as many people as possible.

RBS: Was it tough starting out?

RP: I had to give away the first year before people saw the value.

RBS: When did it turn the corner?

RBS: Once you realized people were willing to pay for your services, how did you set the prices?

RP: The normal fee for an individual is $595. That includes filming, editing, a personalized website, personalized DVDs and back-end support — talking strategy, communication and developing relationships with coaches. I spend more of my day doing that than film.

RBS: What about competition?

RP: There’s a little bit. First, parents can do this themselves. But most parents don’t have the skills, the technology or the time. There are some bigger national companies that offer this, but it’s not as personalized. It’s more of an assembly line.

RBS: What’s your greatest success story for one of your athlete clients?

RP: My greatest success story is a kid from Charlottesville. His backup school was Cornell. He committed to a school that costs $52,000 a year. With his academics, they put a package together for that kid worth $43,000 a year. His dad thought I was expensive when he first met me.

RBS: Part of your service is a webpage for the athletes. Has sending a coach a link to a website replaced the traditional recruiting video?

RP: A webpage is probably the most common way. Kids still get DVDs. But the DVDs are disappearing. The Web is key, and coaches are used to this.

RBS: How do you handle those parents who think their kid is the next superstar?

RP: You hear, “If my kid is good enough, he’ll get found.” Everybody thinks his kid is Cal Ripken. It’s not my place to tell them they’re not.

RBS: How big do you think your business could get? Do you have a figure in mind to where you can still handle it on your own and make it a career?

RP: I’ve got a figure in my head. I’ll keep it in my head. But I’ve seen bigger doesn’t always equal better. I’ve been approached by some people to franchise this. That could be a viable option down the road.

RBS: Where did the name “Play In School” come from?

RP: Because every kid wants to play in school.

RBS: How are your prospects looking for 2011?

RP: I want to offer team packages, which will hopefully get my name out there to a lot of kids. This graduation year [June 2011], I’m going to have about 50 kids [clients] that go on to play college sports. Looking at class 2012, business is definitely ahead on the individual packages with the hope that team packages will jump me up a bit.

I also want to increase my football business. I’ve been cutting my teeth with baseball. I’m ready to expand.

This is a fantastic idea! Sounds like a great investment for student athletes!