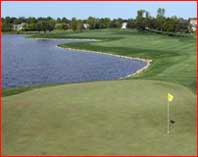 Members of a bankrupt local golf club are asking the court to help them get their initiation deposits – as much as $22,000 per person – back from the club’s developer and owners.

In January, the Dominion Club in western Henrico County filed for Chapter 11 bankruptcy protection after it was faced with a $1.7 million tab of initiation deposit refunds due to about 100 members at the end of 2010.

On Monday, the bankruptcy creditors committee, made up of seven current and former Dominion Club members, filed a lawsuit in federal bankruptcy court seeking $11.6 million from various entities, all tied to HHHunt Corp., one of the area’s largest real estate developers.  (You can see the lawsuit here).

The committee claims in the suit that Hunt and the other entities have always supported the Dominion Club’s operations and its deficits and that initiation refunds due now and more than $10 million due down the road should also be paid by the owners.

“Hunt and all its entities surely have $11.6 million, and while they bankrupted the Dominion Club and left nearly 800 members holding the bag, we feel there are entities and companies that are liable for that,” said Nick Nichols, the chairman of the creditors committee.

Dominion Club, along with the related Wyndham community, was built by HHHunt. Harry Hunt owns 4.5 percent of the club, according to court records. HHHunt Corp. owns 0.5 percent, and the Hunt Family Trust owns 95 percent.

Loch Levan is technically the club’s landlord. Hunting Hawk LLC is the operator of the course, according to the suit. (HHHunt also developed a local golf course named Hunting Hawk, but this case is unrelated to that course).

“We disagree with the allegations and claims in the complaint and will be responding accordingly through appropriate filings in the Bankruptcy Court,” Westermann said in an email response to BizSense. “It is our hope that these proceedings will not have a negative impact on the club’s restructuring efforts.”

That restructuring, at least when the bankruptcy was first filed, was aimed at having the Dominion Club become member-operated.

Vernon Inge, an attorney with LeClairRyan who represents the Dominion Club in bankruptcy, is working to make sure that transition still takes place.

“I’m still hopeful we can get all these issues resolved and get a plan going forward to save the club,” Inge said.

Nichols, a Wyndham resident and member of the club since 1994, isn’t so sure the members will be amenable to the idea of taking over the club because of the recent events.

“That’s probably not going to happen because [the defendants] don’t want to sell the club and they’ve been unreasonable relative to leasing the club,” Nichols said. “Financially it just isn’t viable.”

There are lingering questions about how this suit will play out and how it will affect the future of club.

The lawsuit provides one possible scenario.

The creditors committee is represented by Tyler Brown, an attorney with Hunton Williams. BizSense was unable to reach Brown by deadline.

A message left for HHHunt Corp. President David Reemsnyder was not returned by press time.

Meanwhile, back at the club, Nichols said it’s mostly still country club life as usual for its nearly 800 members.

“We’ve asked the membership to be patient,” Nichols said. “I know there have been a few resignations, but not many. And people have continued to pay their dues and enjoy their club.”

But Nichols said this latest suit could put a chink in some of that support.

“I don’t know what’s going to happen as a result of the lawsuit,” Nichols said. “That may change the members’ perspectives.”

Shameful what HHHunt is trying to pull off here! They have made and continue to make millions off our community. They certainly have the money to re-pay members, yet they are doing all they can to cheat the very community that put them on the map and made Harry Hunt one of the richest individuals in Virginia. Dan Schmitt, a local HHHunt executive who lives in the community is at the center of this mess. How can he show himself in public is beyond me! If I was someone considering a new home in a Hunt community like Rutland, Twin… Read more »

April 6, 2011 – I purchased and HHHunt home in 2006 in the CoolWell sub-division in Hanover county the home will be 5 yrs old this Nov. I have had nothing but problems with the home since I purchased it. I have had two (2) roof leaks that caused extensive damage to my interior Florida Room. A new home should never encounter a leaking roof. Hunt had a quick solution for my roof leak a “little caulking” here and there to remedy the problem. Needless to say that did not solve my leaking roof problem. The second leak did more… Read more »

peeeeeople………….pleeeease don’t respond if you are going to talk about your house’s quality or about HHHunt screwing club members. When you join a club you take on certain risks. BAd economy, more golf courses=problems. You club members are a bunch of babies, maybe the government will bail you out! Maybe there should be an insurance you can buy to protect you from losing your deposit when joining a country club! Silly people with a little bit of money join stupid golf courses so they can hang out with others with little money. Golf clubs are stupid in this state being… Read more »

I really don’t feel any sympathy for the members here. It seems pretty clear what Hunt’s intentions where in setting up that type of arrangement. If you couldn’t figure that out, maybe your $22,000 is in better hands with someone else.

The more I read about this situation, the more I feel like this is Exhibit A for the reason club members should own their club, not a corporation. Club members are always going to be more invested in the health of the club than a corporation ever will be. It’s just the nature of the beast. I have mixed feelings for the plaintiffs. On the one hand, getting your initiation back is the exception to the rule. For most people joining clubs an initiation fee is part of the cost, I am sure other club members such as myself were… Read more »