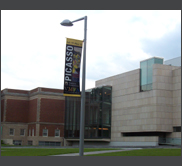 More than a quarter-million people came through the Virginia Museum of Fine Arts to see a rare collection of Pablo Picasso works. The month-long exhibit, which ended Sunday, was a major boost to the local hospitality industry, filling hotel rooms and bringing out-of-town spenders to local restaurants and shops.

The Jefferson Hotel, for example, said it booked 1,600 guests who were heading to the museum.

Alex Nyerges, the museum’s director, said the Picasso exhibit sold more than 229,000 tickets, which was more than the 200,000 the museum expected.

Nyerges said the museum sold $2.6 million in tickets for the Picasso exhibit and sold close to a half million in memberships. Nyerges also said that the Picasso exit store, a gift shop, did $1.4 million in sales over a three-month period.

The museum spent about $5 million to put on the exhibition, including a $700,000 marketing campaign.

The museum was a mob scene this past weekend. Nyerges said 600 people came through the door every hour for a total of 8,400 visitors Saturday.

“We were sold out every single hour on the weekend,” he said.

The exhibit stayed open until midnight on Saturday and until 5 p.m. Sunday for last-minute museum-goers.

Nyerges said the fact that VMFA was the only museum on the East Coast to host the exhibition contributed to its success.

“Picasso was the most important artist of the 20th century,” he said. “Either you had to go to Paris or see it Richmond.”

Nyerges said the museum usually has 350,000 visitors a year and has already seen 300,000 for the first quarter.

Most of the visitors hailed from the Central Virginia area, next came Tidewater, then Northern Virginia and the rest of the East Coast.

“I’ve had guests from New York, Ohio, Florida,” Nyerges said. “It was everywhere.”

The museum has had other popular exhibitions, such as an Egyptian exhibit in 1999 and Faberge in 1996, but Nyerges said Picasso was without precedent.

“We’ve had more visitors per day for this exhibition than anything we’ve ever done,” he said.

About 24 hotels, 10 retailers and 17 restaurants partnered with the VMFA to get a piece of the Picasso action.

Many of the businesses offered special packages or deals to draw in museum-goers. Most of the hotels were giving admission tickets to guests who paid the normal room rate.

Rick Butts, director of sales and marketing for the Jefferson Hotel, said the Picasso exhibit has brought them more business than any other exhibit to date. The hotel offered a package for $265 that included an overnight stay, two tickets to the exhibit, breakfast for two and parking.

Butts said the hotel sold about 800 packages, bringing in about 1,600 guests.

“It’s been a good mix from New York and the Northeast area,” Butts said. “We’ve seen a good amount of traffic from Virginia Beach and Northern Virginia.”

Bill Jordan, director of food and beverage for the Omni Richmond hotel, said he has partnered with the museum for events before and was expecting an influx of business.
The hotel offered a package for two starting at $169 and sold 65 packages to 130 guests.

Jordan said that the guests mainly traveled from areas three to five hours away and that the exhibit brought customers who normally wouldn’t be traveling to Richmond.

“These were certainly additional guest stays that may not have decided to come to Richmond if not for the Picasso exhibit,” he said.

Denny Pierce, general manager at the Berkeley Hotel in Shockoe Slip, said this past weekend was the busiest for museum-goers.

“We were sold out Wednesday through Saturday,” Pierce said.

“There wasn’t a real draw to come to Richmond,” he said. “It puts Richmond on the map with a more sophisticated art clientele.”

Many local restaurants offered discounts to diners who presented a Picasso ticket.

Dane Acton, manager of Delux Diner and Lounge in the Fan, said he saw extra foot traffic because of the exhibit.

“It helped bring more people on the outskirts of Richmond,” said Acton. “It brought a lot of good clientele to us.”

The restaurant offered half-price appetizers with the purchase of an entrée, and Acton said that brought them an extra 20 to 30 people each week during the ran.

“It helped us get our name out there to people who wouldn’t even think of coming out this way,” he said.

Hoorah! for the VMF for this major success. Now, let’s do it again!