A Richmond chef is setting out on his own, adding a third restaurant to Rocketts Landing.

Michael Hall, the former chef at the Berkeley Hotel and Bull and Bear Club, is investing almost half a million dollars in M Bistro and Wine Bar at Rocketts Landing. He hopes to open in late June.

The chef-turned-entrepreneur left his management job at the Bull and Bear Club in April.

“I’ve wanted to branch out on my own,” Hall said. “I’ve been looking for a place since last July.”

After looking at a couple of places downtown, Hall leased 3,000 square feet at 4821 Old Main St. within the Rocketts Landing development. His restaurant will be the third at the mixed-use project.

“The Boathouse is booming, and Conch Republic is doing very well,” he said. “I thought Rockets Landing would be the perfect place.”

The restaurant will serve coffee and Danishes in the morning, and offer lunch, dinner and brunch on Sunday.

The menu will include items crab cakes, duck and other French comfort food.

“It will be my background of Virginia southern and French,” Hall said. 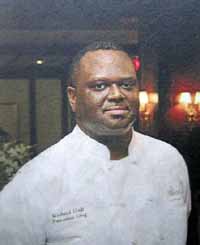 Hall said he wanted to include a wine bar in his bistro idea to add something new to the local restaurant scene.

“I always liked the concept of food and wine,” he said. “Its something that’s not going to go away, and there’s nothing much like that in the area.”

Hall said the theme would be contemporary with a small lounge for drinking wine and about 100 seats, including an outside patio area for dining.

He also plans to have a small retail display section with wines, chocolates, cheeses and other items.

“We’ll have a display of gourmet olives, olive oils and other stuff,” he said.  “Like you would see at a Trader Joe’s, that type of thing.”

Hall said he invested about $447,000 to redesign the space and is just putting the finishing touches on it.

Congrats to Michael. He is not only a great chef but also a great and gregarious person. Can’t wait to sample the fare and ambiance of M Bistro. Keep us posted on the date for opening night….Boib

Michael did a fine job for us at the Bull & Bear and we wish him well. He is a master in the kitchen and a gracious person.
We’re looking forward to the opening.
Bob Hicke

Can’t wait to see the new venue! I plan to go there all the time. Michael is an amazing chef.

Good Job! I’ve seen the space its very nice I cant wait to see what it tastes like.

Congratulations and best wishes to a great chef who was well liked at the Bull & Bear Club. Rocketts Landing is fortunate to have him back in the public domain.

Welcome to our community; can’t wait for you to open. We’re forwarding the word to all our friends and associates……Best of luck.

This is yet another perfect addition to the Rocketts Landing community! We are looking forward to having you here Michael, as well as enjoying many amazing meals at M Bistro! And coffee with a danish in the morning too? Can’t wait!

We’ve known Michael for decades (Since None Such Place) and he is truly a master in the kitchen! We are absolutely thrilled that he will be joining us here at Rocketts Landing where our new office is located, and keep the crabcakes coming! We are spreading the word and will support you in every way possible!