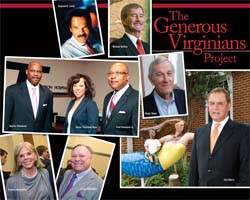 The magazine contacted 260 companies, 100 families and more than 225 nonprofit organizations to provide their top 15 donations of at least $25,000 since January 2010.

VCU was the top local recipient thanks to a $25 million donation from James W. and Frances G. McGlothlin of Bristol, Va.

Six Richmond corporations made the total corporate donations list of $1 million or more.

Altria Group led local corporations with $12.14 million in total donations last year, according to the list.

Other local companies that made big-ticket donations included:

Nine Richmond companies were on the list for individual donations. Altria Group made the largest single donation among those companies with a $2.8 million donation to the University of Virginia.

Dominion Resources donated $500,000 to the Virginia Museum of Fine Arts.

The Community Foundation Serving Richmond and Central Virginia made the top of the grants list with a $3.3 million donation to the University of Virginia.

Notable donations by local independent foundations included $1 million to the Virginia Historical Society from the William B. Thalhimer Jr. Fund of the Community Foundation.

See the full lists of individual and corporate donors here.