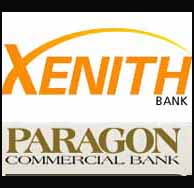 Richmond-based Xenith Bank began last week with about $288 million in total assets. Then it went on a buying binge.

After it closed two big deals Friday — one involving a failed local bank and one involving a North Carolina bank looking to exit the Richmond market — Xenith now has more than $400 million in assets.

First came the closing of Xenith’s acquisition of the Richmond operations of Paragon Commercial Bank. The deal, which was announced June 2, marks the official exit of Raleigh-based Paragon from the Richmond banking market and gives up-start Xenith a quick shot in the arm to grow its asset and employee base.

As part of the deal, Xenith took on $62 million in loans and $75 million in deposits from Paragon, adding to its $264 million in total assets, $108 million deposit base and $172 million loan portfolio. Xenith said it’s keeping all 12 of Paragon’s local employees.

Then, once business hours ended Friday, a bombshell dropped.

Richmond-based Virginia Business Bank failed and was taken over by regulators. Xenith was announced as the healthy bank that would take over the failed bank’s assets.

Xenith made a bid along with an unknown number of other banks for VBB’s assets.

Xenith, according to Layfield, chose to make its bid without the use of FDIC loss-share coverage, which would give it some insurance should some of the VBB loans it takes on go bad.

Layfield said Xenith was confident enough to make that move because it had the ability to look at the assets it was taking over.

“We felt like with most of the loan portfolio right here in our own back yard we could make an independent assessment about the assets and liabilities,” Layfield said.

The exact dollar figures involved in the Paragon and VBB deals aren’t easy to calculate.

Xenith pays a percentage on each loan it acquires in the deals. Xenith gets paid for taking on the deposits, which are technically liabilities.

The failure of Virginia Business Bank is expected to cost the FDIC deposit insurance fund $17.3 million.

In the Paragon deal, Xenith received close to $10 million in cash from Paragon in the end.

In addition to growing its assets base, Xenith also finds itself with two new branches — one from Paragon off Glenside Drive and one from VBB on Stony Point Parkway. Those won’t be around long, though. Layfield has said both branches will be consolidated into Xenith’s existing Richmond branch.

“Multiple locations are not necessarily critical to our strategy,” Layfield said.

It has five branches, including one in Richmond, one in Northern Virginia and three in Suffolk.

With the addition of the dozen Paragon employees, Xenith now has 100 employees.

“We envisioned bringing the majority of them over,” Layfield said. “At the end, it seemed like the best thing to do was bring the whole team over.”

Among those employees is Mike Keck, a veteran banker who had been Paragon’s Richmond market president. He’ll be a senior vice president at Xenith and will continue to work commercial and industrial lending, Layfield said.

Xenith hasn’t made a decision about whether any VBB employees will come over. VBB had 11 full-time employees as of the end of the first quarter.

“With our being right here in town, we obviously have some capacity to absorb the work associated with [taking on VBB’s assets],” Layfield said. “But next week we’ll get a look at what needs to be done as far as who we need to bring on.”

Xenith’s sudden appetite for acquisitions hasn’t played out quite how the founders drew up their business plan.

When raising its initial capital years ago, Xenith’s founders wanted to start a bank completely from scratch. But the economy had other plans, and getting a charter from regulators to start a new bank became next to impossible.

So in late 2009, Xenith acquired Hampton Roads-based First Bankshares and its subsidiary SuffolkFirst Bank, giving it the charter it needed to get Xenith Bank up and running immediately.

It also had planned to grow organically: one customer in the door and one loan and deposit at a time.

But the Paragon and VBB deals were too good to ignore, especially because Xenith was flush with cash after completing an almost $20 million stock offering this year.

“We would not have envisioned that way back in late 2007, when we first started thinking about this,” Layfield said. “But the landscape has changed.”

Although the means by which it has grown might not be what it planned, the size the bank has reached is something it has been preparing for.

“We’ve said from the beginning that we built the infrastructure to manage a larger bank, and we’ve needed to grow into that infrastructure,” Layfield said.

“We ultimately think the vast majority of our growth will come over time organically.”