A local payroll firm is expanding its reach in Maryland to help almost two dozen small businesses that were recently left in the lurch.

And in addition to rebuilding clients’ payroll records, Checkright has had to rebuild their trust.

“We’ve got everyone caught back up,” said Arch Wallace, who started Checkright in 2004. “They’re starting to feel safe again.”

Wallace said he has set up protected user IDs so clients can go on the website themselves and check to see that his company is making the payments.

Focus, which was based in Rockville, handled payroll for small and medium-size businesses. The work included collecting, withholding and processing payroll taxes.

Wallace said that instead of handing clients’ withholdings over to the IRS, the company’s owner pocketed the money and used it to cover operating expenses for the business.

“You’re supposed to keep it in a separate trust account,” Wallace said. “The owner was marrying his money with their tax money.”

“He had a business that wasn’t doing well and used his clients’ money to augment that,” he said.

“Some people were trying to sell the company and found the problem,” he said. “That’s how it all came out.

The FBI started an investigation into the firm and shut the business down last month. 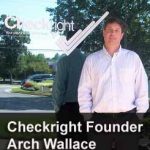 “Our software provider was involved with the customers, and they started getting calls and pushed them to us,” he said. “We were the closest to Rockville that ran on the same platform.”

In exchange for the new clients, Wallace spent two weeks helping them undo the damage and get their tax payments straight at no cost.

“We’re having to go back and get their taxes paid and getting letters written to waive penalties,” he said.

The companies will have to pay the taxes again, but Wallace is working to get the penalties and interest for late charges on the taxes waived.

Geoff Stewart, owner of Shady Grove Pharmacy in Maryland, was one of Focus’s clients for 11 months.

Stewart said that he didn’t have any suspicions going into it but said he started having doubts the last few months Focus was in operation.

“Payroll started unraveling toward the end,” Stewart said. “Paychecks were late, and emails and calls were not returned.”

Wallace was the one who had to call Stewart and tell him the bad news.

“There was no announcement, no email,” Stewart said. “It was very sudden.”

But Stewart’s eight-person business is recovering from the damage.

“The amount of taxes that were not paid was small enough that I could cover it,” he said.

Wallace said his new clients increased the size of his business by 10 percent in one day.

To handle the workload, he’s hired one new employee and plans to add one more, bringing his total headcount to six.

One man’s trash is another man’s treasure. All bad news in business has an upside to it. Great job Arch. Way to step in there and help those people out. Their is so much evil in the world of business that if you are honest and hardworking their is a plethora of opportunity. This is a great story.

Arch, this is really a phenomenal story. Congratulations on well-deserved new clients.

Congratulations Arch Wallace , business man extradinaire, your attention to detail will continue to pay dividends to your clients. Proud to see the growth. Dr. Clemons

These small business owners were fortunate to have landed in your very capable hands. It’s great to see the growth for Checkright.