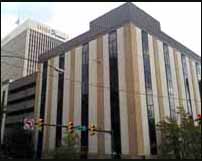 Dominion Resources has given itself some room to grow.

The Virginia-based power company just bought the office building at 111 S. Sixth St. from D.C.-based Douglas Development for $5.5 million. It is across the street from Dominion’s headquarters at One James River Plaza.

Dominion spokesperson Ryan Frazier said the company is determining how it will use the space.

“We are currently developing plans for our use of the property, nothing specific yet,” Frazier said.

Frazier said about 2,000 Dominion employees work in the downtown area.

Douglas Development acquired the property in 2007 for $11.8 million.

Norman Jemal, who is the son of company founder Douglas Jemal and head of leasing for the company, said the firm responded to Dominion’s interest.

“They had been inquiring,” Jemal said. “We tested the market, and it proved they were the best buyer.”

Jemal said his firm is also selling the 3.2-acre Interbake property, a former cookie factory near the intersection of Broad and Boulevard.

“Investors and developers seem to have a very strong appetite,” Jemal said.

Gee, I thought CRE was supposed to heat up in 2011? (sarcasm) I especially love how Mr. Jemal says that investors have a “strong appetite” in the same story which discusses his firm unloading a property for 50% of the purchase price.

It would be nice if this building were knocked down and a more inviting building built. This is one of the gateways to downtown Richmond off the downtown expressway and the first thing you see when you get off the highway is a giant iron gate in front of you.

@William Byrd – what off ramp and gate do you speak of? There is teh gate on the corner of the building but that is hardly a centerpoint of the views you see entering downtown, and Im not sure what ramp places you there…I may be forgetting something . @Kevin Meyer Anderson – the strong appetite is for the Interbake building…there could be a lot of good uses for that place with its high traffic location and parking. On a related note, the Interbake property is a serious blight to a serious gateway to Richmond. Many many travelers get of… Read more »