Pennsylvania-based Yapple Yogurt, a nascent self-serve frozen yogurt business, will open its first Virginia location in Carytown in early December — right next door to booming yogurt chain Sweet Frog. (You can get caught up on Sweet Frog’s rapid rise in a BizSense story here.)

Andy Lin started Yapple in May, opening a location in Wynnewood, Pa. Lin has since opened three other shops in New Jersey and Pennsylvania and is on a fast track for expansion.

Lin recently graduated from Rutgers University and was running the businesses while he attended school. His father is financing the shops and is a silent partner in the venture.

Lin and his cousin Scott Yu will run the Carytown shop. After browsing the local retail scene with Richmond commercial brokerage The Shockoe Company for the past four months, the entrepreneurs this month leased a 5,500-square-foot space in the former Richmond Piano spot at 3133 W. Cary St., which has been vacant the past two years.

Lin said they were looking to expand because of the success of the other locations. He wouldn’t disclose revenue numbers.

“The revenue stream has been very good, and it’s a low-risk investment,” Lin said. “It’s a great model, and I think the way we’re doing it is a little different.”

Neighboring yogurt chain Sweet Frog is just two doors down, and Lin said the move to the space nearby was intentional.

“We want to compete with the largest player in town,” he said. “If you want to be successful, you go after the biggest player.”

Lin said competition is rampant among the other Yapple stores as well.

“Most of our other stores have competitors right next door, and our business hasn’t been affected,” Lin said.

Lin has worked with in his father’s restaurant in Pennsylvania since he was 16. His father owns Kawa Trading, a Pennsylvania-based food distribution company.

Yu has lived in Richmond for the past 10 years working as a manager for his mother’s Asian buffet in Midlothian. His mother has been in Richmond’s restaurant scene for 15 years.

The pair say they know the fro-yo business is getting frothy.

The entrepreneurs said they are introducing a drink line, which they think will separate them from the pack.

Lin noted that many yogurt chains have their yogurt packaged and sent frozen to them. 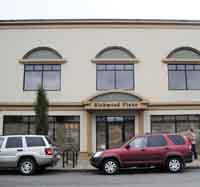 He said they would be making the yogurt fresh daily along with sourcing their fruit, milk and other ingredients locally, which he hopes will also make them stand out among their competitors.

Lin said this will be their biggest Yapple store yet. Most of the other shops are about 1,200 square feet. And because they’re a gutting the entire space, it will also be the most costly.

They plan to add a spiral staircase and put in surrounding windows and use local artists to design the shop.

They aren’t looking to franchise Yapple yet, but Lin said it could be a possibility.

“We don’t want the brand to be ruined by a franchisee,” he said. “It’s too new.”

I fail to see the logic of setting up shop someplace which already has more than adequate ice cream resources and splitting the business or running a similar company out of business just because it is nearby not worse, when you can go someplace which is ice cream-deprived and have all the business.

Shockoe would have welcomed you with open arms. I’m not so sure about Carytown. I guess they didn’t want to pay for their own marketing analysis. Sort of like cheating.

Aww, c’mon guys, don’t worry. Sweet Frog has god on their side, right? They’ll just pray the competition away!

If I were advising Yapple I would let them know that Ben & Jerry’s located a store in Carytown twice and closed both. They couldn’t compete with Bev’s , the “hometown” ice cream shop.

Why not go for a “home run” location to start with ?

I wish them all luck, but will keep my Carytown ice cream business down the street @ Bev’s!!!

If there’s room for two that’s fine but if one has to fail I certainly hope it’s the invading chain. Bev’s thankfully beat Ben and Jerry’s. As others have already noted there are plenty of places where it would have had a monopoly in the ice cream business… Shockoe Bottom and Slip come to mind.

As a venture capitalist, I would never invest in a company that decided to move in right next door to their competition. Especially when yapple appears to have an identical business model to sweet frog. Did yapple do ANY location research? What a huge mistake. Especially in Richmond, a city know for it’s loyalties. The loyalties are with the company already established in the neighborhood, Richmond is famous for its food industry loyalties. The incoming identical business will falter in less than 5 years at that location. Foolish move boys.

I think it going to be a neat addition to Carytown. Sweet Frog have been popping out everywhere and it giving us consumers very little choice and experiences from other yogurt stores. I know that SF is opening a new store in Midlothian Tpke, in the same shopping center as Starbucks. The fact that they want to compete with SF shows how confident they are. I’m a huge fan of yogurt and have went to many yogurt stores in the East coast, SF yogurt is kinda mediocre compare with other yogurt stores. (Menchie’s, Pinkberry, etc) Overall, I think Yapple would… Read more »

I welcome yapple. It is a much smaller chain than sweet frog, neither of which are originally from Richmond. I hope that they have superior graphic design and restaurant design. Sweet frog is, in my opinion, tacky. The frog in particular is poorly done. It seems to be a good business decision, there is clearly enough market for two frozen yogurt stores. Now people who are not sold on sweet frog will have another option. I dont think a sterile chain with little character like sweet frog will inspire too much loyalty from Richmond’s who, in general, can tell the… Read more »

in response to some above comments… yes, we in carytown do have a lot of loyalty to local businesses, but sweet frog is neither local nor a long time location here, so i have no problem with yapple stealing some sweet frog business. i hate to see our great local places get pushed out by chains like sweet frog. luckily, i don’t think bevs will have any problems, as they’re a long time resident and better than either yapple or sweet frog. ultimately people will support bevs for the quality of their product. for anybody interested, bevs ALSO serves frozen… Read more »

Kyle, Sweet Frog (SF) is a local business that has become a chain. SF’s corporate headquarters is the Carytown location, and all of the other 200+ SFs are franchised out.

With that being said, Yapple’s frozen yogurt product is essentially identical and their store has a better atmosphere.