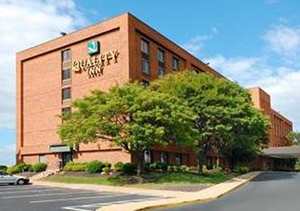 The lender on a Henrico hotel is seeking permission to appoint a receiver to collect rents generated by the property.

Sunburst acquired the Quality Inn Richmond at 8008 W. Broad St. in 2005 from First Choice Hotels for $5.7 million. The deal was financed with a $3.8 million loan from Wells Fargo.

The loan was later bundled and sold to investors by Morgan Stanley. U.S. Bank is trustee to the Morgan Stanley certificate holders and is the plaintiff in the suit.

Terry Frank, an attorney with Kaufman & Canoles’s Richmond office who is representing U.S. Bank, said she could not comment on the case. The bank seeks the appointment of a receiver to collect rents and alleges in its suit that income from the hotel is not being used to pay down the loan.

Calls to Sunburst’s general counsel were not returned.

The county assessed the 192-room hotel at $3.5 million. The six-story, 81,000-square-foot building sits on almost three acres.
Hotel occupancy has been on the mend for the past year and a half. For the first half of 2011, occupancy is up 3.9 percent in the Richmond North/Glen Allen area and up 6.4 percent for the entire Richmond-Petersburg MSA compared with the same period last year.

The Quality Inn Richmond isn’t the first Broad Street hotel to default on its loan in recent years. In summer 2009, the Sheraton near Broad and I-64 was foreclosed on with a loan of $29.5 million. The hotel is now a Ramada.