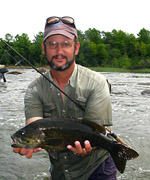 A Richmond guide is motoring down the James River five day a week now that he has added historical and wildlife tours to his fishing expeditions.

For $40, Mike Ostrander guides locals and tourists on two-hour wildlife adventures along the James River through his business, Discover the James.

“Fishing trips were my livelihood for a number of years,” Ostrander said. “It’s turned into not just a tour but an ongoing story, and it just keeps getting stronger each year.”

A five-and-a-half-mile eagle tour gives people a chance to see five bald eagles nesting along the James along with other wildlife.

“It’s neat to take people out to tell them about the history of the eagles on the James River and Virginia,” Ostrander said.

He starts the tours on his 24-foot pontoon boat, Discovery Barge II, and launches at the Deep Bottom boat landing in Varina. The tours travel through Jefferson Reach, a section of the James River that runs to the Richmond Yacht Basin in Henrico.

Ostrander said the Captain John Smith and Virginia Indians tour, which he launched in spring 2009, spawned the idea for other spinoffs.

“I’d been thinking about doing the eagle tours for four years,” he said. “In the fall of 2009, I started running on them a regular basis.”

“Now they’re getting pretty popular, attracting people all over the country,’ he said.

The Civil War and fishing tours are also two hours and, like the eagle tours, are offered year around.

“I offer [half-day and full-day] guided fishing trips … and teach classes in the summer and the fall,” he said.

The Civil War tour is a six-mile trip that leaves from Deep Bottom Boat Landing to Trent’s Reach in Henrico.

“It’s not like I have every boat filled up, but its growing and word’s starting to spread,” he said. “It’s a sustainable business.”

About 60 percent of the people that sign up for the tours are local, and the rest our tourists, Ostrander said.

“I had a guy from the Netherlands email me and book a trip,” he said.

Ostrander started the business as James River Fishing School, offering guided fishing trips, but changed the name a few years ago to Discover the James when he added the tours.

Before starting Discover the James, Ostrander worked as a volunteer fishing instructor for the Department of Game and Inland Fisheries in the late 1990s. He worked full time at Richmond Camera until 2007, when some co-workers persuaded him to pursue his passion.

“It was my dream to become a fishing guide,” he said. “I felt I could make it if I focused all my intentions on the river.”

Ostrander said he’s planning to add more tours within the next few years.

“I’m working with different people in the city where they would be the expert and come on board and give a great program on the water,” he said.

Mike is a great steward of the James River and someone that truly represents the American Dream. I’ve not yet taken one of his tours but I volunteer with plenty who have and they raved about it. Thanks for the article.

I gave my husband the Civil War Tour for Christmas, but we just had the tour last weekend. What a great day and the lecture was great. My husband is a big Civil War historian and he learned a lot about the warfare on the James River…amazing Ironclad Boat History…with maps and pictures to go along with the lecture.
The eagles and birds we saw were a huge bonus….I want to go again.

I’ve taken the Eagle tour twice, I highly recommend it. Especially for photographers (book the early tour). Mike is a wealth of information and so passionate about the James.