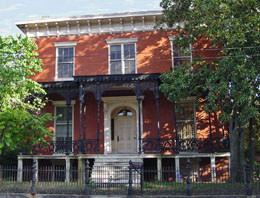 Veteran developers renovating a historic mansion in Shockoe Bottom like the mixed-use project so much they’re going to move in themselves.

“The property has been vacant for three to five years,” Miller said. “The previous owner was in over his head, and we were able to pick it up.”

Miller said the previous owner was about a third of the way through converting the property into apartments.

“We are going to rehabilitate the building using state and federal tax credits and bring back the main house to be a first-rate office building,” Miller said.

There are two other buildings on the property, a carriage house and what originally was built as servants quarters, which will be converted into three one-bedroom apartments. The property is next to several other historic homes and buildings, tucked behind East Broad Street and the bars and restaurants of 17th Street.

Miller said the entire project will cost $1.25 million, including the $700,000 purchase of the property. Miller said he hopes to be done over the summer.

As for the office space, Miller said he already has a tenant for one of the units: his own firm.

“This will be corporate headquarters for Urban Development Associates,” Miller said. “Dan and I both will have offices in the building and will be there full-time.”

They will move from their current office at 19th and Broad.

“There are three other offices in the building, and we looking for tenants that would mesh nicely,” Miller said.

Urban Development Associates is the company Miller and Gecker, who is a Chesterfield County supervisor, use for their large portfolio of holdings in Manchester. The duo owns roughly 150 parcels in that area, of which they have developed about 40, including the Old Manchester Lofts. Their next project there is a new 44-unit apartment building at 909 Perry St.

The National Parks Service has more on the history of the Pace-King House.

As the subject property was constructed at the time of the Civil War, does your reference to “servant quarters” actually mean “slave quarters”? If so, I would expect some backlash as to this use. Certainly this would be an ideal opportunity to preserve this beautiful estate home and and utilize the “quarters’ to help preserve history and continue the racial healing in Richmond. M. Galt

I agree with Mr. Galt, the National Parks Service website http://www.nps.gov states that “The house is noteworthy because of the large slave quarters in the rear of the property”. While I am pleased with all of the new development in the area, shouldn’t there be some consideration for historical significance. If developers continue to be motivated by greed, I fear the preservation of such landmarks will be overlooked. Doesn’t it seem ironic to fund a project with state and federal historic tax credits while ignoring the original use of the mansion and slave quarters? What a great opportunity this would… Read more »

I don’t think Miller and Gecker are purchasing and improving the property for the historical significance nor another museum. That would have been the City of Richmond’s job. Didn’t the Slavery museum idea just fail in Fredericksburg area? Why is it so bad to do something to “potentially” make money?? Atleast , they are creating REAL jobs for the money they are spending. As for the tax credits, don’t hate the player, hate the game. Someone’s brain cell idea was to give money to renovate these old places that take an enormous amount of money and they don’t specify the… Read more »

Mr. Miller, thank you for continuing to make wonderful improvements to our city. If other people on this forum have such great ideas then maybe they should organize their own groups and purchase it themselves instead of speaking out against someone who actually has influenced this town in numerous positive ways. It’s not even the city of Richmond’s job to create museums anyway. The museums in this town are started by passionate people working tireless hours to create foundations so that the public can enjoy them. Does anyone honestly think the city is responsible for VMFA and the Science Museum?… Read more »

Bottom line–another vacant property is taken off the list. And there are plenty more slave quarters in the city that have been restored to serve modern needs… it’s not a new trend. Kudos to Robin and Dan for developing our city the right way.