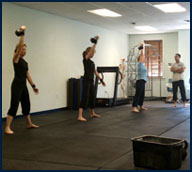 Cabell Jones is whipping Richmonders into shape, one kettlebell swing at a time.

Jones started the Richmond Kettlebell Club, a Henrico gym that features exercises that use a weighted, cast-iron ball.

“Kettlebell training is about movement, not about sets and reps,” Jones said. “You can do one drill to fix 20 things.”

Jones, 41, said there are about 10 different exerises that use the kettlebell, but in most of the classes he teaches a few simple drills for conditioning, strength, mobility, posture and weight loss.

His membership roll has doubled in the past month.

“Most people want to lose weight and get stronger,” he said. “If someone does the three basic drills for six months, someone would think they’ve been doing every machine every day of the week at the gym.”

A kettlebell resembles a cannonball with a handle and can weigh up to 106 pounds. Jones said he usually has women lift between 15 and 35 pounds and men lift 25 to 53 pounds.

The fundamental move is the kettlebell swing, where you hold the weight and swing it out and away from your body.

The second drill, called the get up, involves a person using the weight to go from lying down to standing up, and the third drill is a squat.

Classes are $80 for a monthly membership, and Jones said he has about 60 members, mostly women ages 35 to 55.

After graduating from VCU in 2001, Jones worked as a personal trainer for two years before branching out on his own.

In 2003, he opened Active Escapes, a 1,500-square-foot “functional fitness” gym in the Tuckahoe Village Shopping Center.

“I always wanted to help people move better,” he said. “The only away to explore that was to have a place.”

Jones discovered kettlebells about five years ago when he came across a physical therapy video in which a therapist used the weights to help someone with weak shoulders. 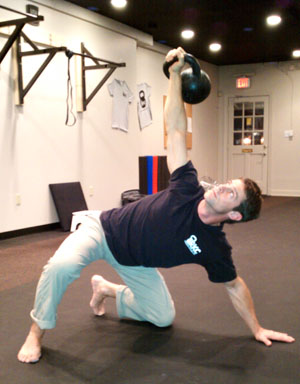 “Kettlebells are fundamental in rehab,” he said.

He started incorporating kettlebells into his workouts about four years ago.

Jones leased a 2,400-square-foot building on North Ridge Road and has been teaching the kettlebell classes for about a month.

“We’ve had more walk-ins in this place then we had in three years at the old place,” he said.

“We can handle more, but that’s our first goal,” he said.

Kettlebells are also part of the workout at CrossfitRVA. You can read about that gym here.

Glad to hear the Kettlebell craze is alive and well in Richmond! I used kettlebells to lose my pregnancy weight (about 20 lbs) in less than 2 months….The Swing and the Turkish Get Up were the exercises I used the most….I did kettlebells 3 days a week for about 30 mins each, then light cardio on a treadmill 1 -2 days a week…worked wonders. I have stepped it up a bit on the running and slacked a bit with the kettlebells recently but I will definitely be back. You can find a great selection of kettlebells and sets here: http://www.sophisticatedfitness.com/category_149/Kettlebells.htm

The kettlebell is a great workout. I incorporated the kettlebell in my conditioning routine while preparing for my first Ironman. It is very surprising on how well the various weights can condition the entire body.