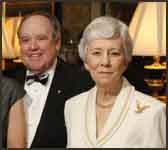 Because they lied about their net worth on loan applications, a prominent bankrupt local couple will stay on the hook for $800,000 owed to Union First Market Bank.

Chapter 7 bankruptcy typically erases a person’s debt by liquidating their assets and paying creditors the proceeds.

Union filed its case against the Fergusons in September, claiming the couple listed on personal financial statements $3 million in imaginary bond and investment assets. Union said the couple intended to deceive the bank.

Well known locally for having run one of Richmond’s oldest bond firms, the former Craigie Inc., Allen Ferguson admitted under oath that he falsely represented to numerous creditors that he and his wife owned a $2 million bond portfolio, according to the judgment.

The couple filed for Chapter 11 bankruptcy protectionin March.  At the time, they planned to work out an orderly plan to repay their debts. But their case was converted to Chapter 7 liquidation in June.

Union’s claim for the $800,000 is secured by a piece of the couple’s commercial assets, which are to be auctioned this month. They include the family rug cleaning businesses owned by Mary Ferguson and parcels of commercial real estate in Oregon Hill and Scott’s Addition.

The proceeds of those auctions, along with the liquidation of their remaining assets will go toward paying the Ferguson’s creditors. Union will retain at least a portion of those proceeds, while the judgment will leave the Fergusons to pay the balance owed to the bank.

Given that the bankruptcy is liquidating their assets, the prospect of Union being able to collect on the remaining debt is doubtful.

Court filings show that several other banks might be considering similar claims against the Fergusons.

Wells Fargo and EVB have asked the court for an extension to allow them to file complaints based on similar concerns.

The Chapter 7 trustee working the case also filed an extension so he can investigate the banks’ claims.

I wish I could get a sense of where all the money went?