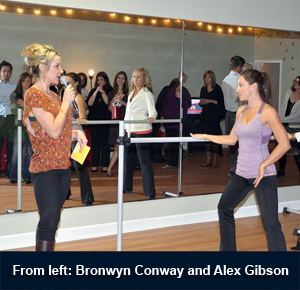 An upstart exercise studio is using a bit of ballet to whip Short Pumpers into shape.

The studio combines yoga, ballet and Pilates. All of the classes incorporate the barre, a wooden bar usually mounted to walls of ballet studios and used for balance.

Conway, 30, has been in the fitness industry for 11 years. She started out teaching kickboxing, Pilates and yoga classes in college at Virginia Tech. After getting her master’s in sports administration from VCU, Conway worked at Gold’s Gym and as a personal trainer with LSE Health and Wellness, a Richmond fitness center.

That’s where she met Gibson, who works full time at a local law firm.

“My company had a contract with her corporation,” Conway said. “We trained regularly and became friends.”

Gibson, 30, and Conway decided about a year ago on a niche angle that could differentiate their idea for a fitness studio.

“We started looking into it and it wasn’t really in Richmond,” Conway said. “It combined all the things I had experience in doing individually.”

The beginner class incorporates more exercises seen in yoga, and the core class involves movements done in ballet such as using the barre for leg lifts, squats and kicks.

A typical exercise that Conway teaches is using the barre to balance while squatting and lifting your heels off the ground, which works the abdominals and legs.

Conway described the exercises as non-impact, and most of the workouts involve using the body’s own mass as resistance to develop longer and leaner muscles.

“You’re not doing any kind of jumping or jarring movements,” she said. “It works your muscles, but doesn’t compromise your joints, which is different than a lot of traditional exercise classes.”

Conway said some of the classes do incorporate small weights to intensify the exercises.

Classes range from $35 for a three-session package to $1,200 for a one-year unlimited package. Conway said most people buy the 10-class package for $100.

Most of her clients are women between 25 and 55, but they are starting to see more men.

As for competition, Conway said there is another woman in the area teaching similar classes, but Local Barre is the only actual studio. That’s not to mention the big players in fitness nearby such as American Family Fitness, Shady Grove YMCA and the forthcoming ACAC.

Other niche fitness studios are popping up across town as well. Hot House Yoga recently set up shop in Western Henrico.

And Studio X, which uses pole dancing as a form of exercise, also has a new location.

Yes! I’m very excited to have a Barre class in Richmond. I went to a class in San Francisco when I was visiting a friend and immediately looked for one at home, but didn’t find one. I can’t wait to check this place out.

This studio offers great exercises for strength, endurance, and flexibility! The Core Barre class is definitely a workout that will get your heart rate elevated, your muscles strenghtened, and your body stretched. Posture definitely improves along with muscle tone. Give a class a try. You’ll love it and want to do more.