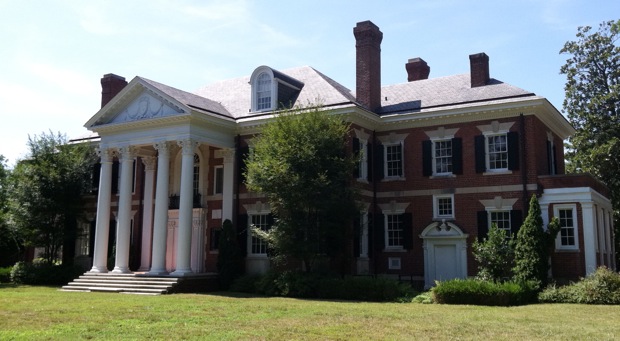 The Georgian-style mansion at 330 Oak Lane will be auctioned Aug. 16. (Photos by Michael Schwartz)

The Georgian-style mansion at 330 Oak Lane just off Patterson Avenue has been scheduled for a foreclosure auction Aug. 16 on the front steps of the Richmond Circuit Court.

The 10,000-square-foot house that French bought in 2005 saw several scheduled auctions come and go in late 2010 and early 2011 due in part to a foreclosure moratorium that several of the country’s largest lenders put in effect last year. 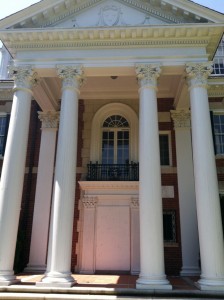 The house’s door is boarded shut.

Bank of America holds the $1.45 million loan on the property. Recontrust, an offshoot of Bank of America that handles only foreclosures, is also the loan servicer.

Built in 1919 and listed in the National Register of Historic Places, the home sits on about two acres and has eight bedrooms and 7.5 bathrooms. The home mostly recently was valued at $1.96 million after peaking in value at the height of the real estate bubble at more than $2.5 million, according to the city’s most recent assessment.

Records from the state Department of Historic Resources, one of the government agencies that French swindled as part of his massive tax credit scheme, show the home was built for Abram McClellan, a Richmond businessman. It was designed by Duncan Lee, a well known Richmond architect of the time. The home was named Pinehurst.

It was renamed Westbourne in 1938 by its second owner, Douglas Southall Freeman, a Pulitzer Prize-winning author and onetime editor of the former Richmond News Leader.

French was issued $433,000 in tax credits on the property, according to DHR records.