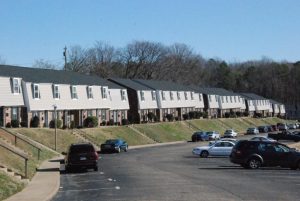 Dutch Village Apartments is one of three properties headed to foreclosure auction next week.

A landlord that had a run-in last year with a local TV station will see more of its properties go to foreclosure next week.

Three apartment and condominium complexes owned by affiliates of locally based Space Properties will be auctioned Tuesday on the courthouse steps in Richmond and Henrico.

According to city and county records, the properties are owned by LLCs tied to Space Properties, which through various entities at one point owned and managed numerous complexes across the region but has seen several of them fall into foreclosure.

Four of the complexes managed by Space Properties and owned by related LLCs were sold last year in multimillion-dollar transactions, three of which were related to foreclosure or short sales, according to Richmond real estate records.

Another, Riverside Drive Apartments, was purchased last month by Richmond-based Thalhimer Realty Partners for $2.35 million. The purchase was made after the 66-unit complex had been foreclosed on.

Space Properties and its head, Robert Owens, made headlines last year when they filed a $53 million defamation suit against WTVR Channel 6, alleging that a series of stories about conditions at Space properties caused the landlord to suffer a loss of rental income and lost property value.

The suit, filed in Chesterfield County Circuit Court in August 2011, wasn’t served initially and was used more as a tactical legal maneuver in an attempt to get the station to back down from its coverage. It has since been served and the case is still pending.

The holder of the loans on the properties to be sold next week is Stabilis Capital Management, a New York firm that invests in distressed real estate. 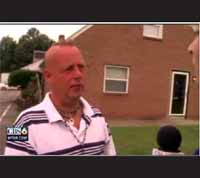 Robert Owens as seen during an interview with CBS 6 last year.

First up for grabs Tuesday will be a package of 33 units at Jackson Pointe and 30 units at Highland Pointe, both of which are in Eastern Henrico. Units at Jackson Pointe, located on Wales Drive, were most recently assessed at about $100,000 each, according to county records. Current assessments for the Highland Point units, on Nine Mile Road, are about $63,000 each. They’ll be sold on the steps of the Henrico courthouse at 12:15 p.m.

Two hours later, Dutch Village Apartments, a 116-unit complex near Jefferson Davis Highway and Bells Road on the Southside will go up for auction at the City of Richmond courthouse. The property sits on 13 acres and was most recently assessed by the city at $5.29 million.

Records show that the complexes are owned by Hopkins Land Company LLC, East End Properties LLC and JSA LLC, respectively, all of which share an address with the Space Properties mailing address on Pump Road and name Owens as their registered agent.

Calls to Space Properties’ office go to a voicemail box that doesn’t allow messages to be left. An email to the company seeking comment wasn’t returned.

Attorneys involved in the foreclosure process would not comment.

Thalhimer is managing the three properties leading up to the foreclosure auction, according to Vice President Drew Wiltshire.