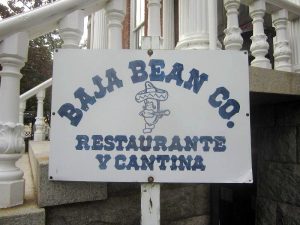 The landlord of a popular restaurant in the Fan is looking to spruce the place up and make way for a new tenant.

John Conrad, a lawyer who owns the Stonewall Jackson Professional Center at 1520 W. Main St., won’t renew Baja Bean Co.’s lease when it ends next October and is marketing the space for a new tenant.

Ron Morse, owner of Baja Bean Co., said that he was not pleased to have to leave his Main Street location but that the business will stay in Richmond. Morse also owns Baja Bean locations in Charlottesville and Staunton.

“We’ve been looking at other spaces on Main Street and calling some restaurants that we’ve been hearing are not doing well,” Morse said. “We’re not going to find anything exactly like what we’ve got, because there’s no space like it.”

Baja Bean Co. opened in Richmond in 2000, Morse said, and sales have been strong in the past two years.

“We’ve been here for more than 11 years, and we’ve been doing incredibly well,” Morse said. “Last year we had a record year.” 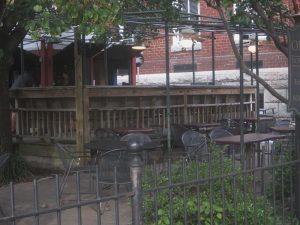 Morse said he’s been paying about $9,000 per month in rent for the 10,300-sqauare-foot space, which is based on a percentage of sales. The space includes 7,800 square feet on the ground floor of the property and a 2,500-square-foot outdoor patio area.

Conrad said in an email that he had nothing personal against Baja Bean.

“Although Baja may not be happy about having to move next year, we have no ill will toward Baja Bean and we have given Baja plenty of notice so that they can find other space,” Conrad wrote. “However, Baja Bean needs to move at the end of its lease so that we can redevelop and physically improve the courtyard outside as well as the entire first floor.”

Conrad said that the space’s zoning allows for a variety of uses and that there might be more than one business going in the space.

“We intend to explore a number of retail uses as well as restaurant operations before we reach any conclusion about exactly what uses we place in the first floor,” he wrote.

The Richmond Baja Bean location got some high-profile exposure in May when President Obama kicked off his reelection campaign at Virginia Commonwealth University. “The Daily Show with Jon Stewart” sent a correspondent to gauge the enthusiasm of young voters.

I never understood why Baja didn’t invest in a serious chef. The food is well known to be terrible. Think of how much more money they could have made if they had classed it up just a bit. It wouldn’t have to be expensive, just good. The patio and pool tables were everything. Without those at another location, it’s just another bar. They will really have to step it up. The latest additions to the hood have raised the bar, no pun intended.

It’s a total dump, and eating next to cobwebs and an inch of dust is a little unappetizing, but I actually like the food most of the time. I usually only go there to drink though. I’m hoping they can improve some things when moving to the next location. They’re also big VCU Basketball supporters, so I hope things will be a little nicer once they start showing away games 🙂

Why would they have spent major money on a chef when they are setting record sales? Baja is more loved and more popular than ever. The grit is part of the appeal.

This is going to be a mistake, while their food is not great it is still decent. It is the nightlife scene that I will miss the most and the opportunity to sit on the patio, have some tecates and people watch. It will be interesting to see how they will try to replace that awesome patio area.

Sad. the building owner sounds money hungry. I will not be supporting whatever is next in the space, and i spent thousands over the years in Baja.

such a shame that everyone thinks it bad for anyone to make more money these days. it would be ok for the restaurant owner to try and make more money by leaving to find a new location at the end of the lease, so whats the matter with the landlord doing the same by finding a classier biz to rent the space at the end of the same lease. what a double standard! thanks obama for this class warfare mess!

I think most people in Richmond 20’s to mid 30’s have some good memories at Baja Bean Co. The cheap Tecate and patio are staples in the Fan/VCU area. So I fully support the facebook pages and overall support of the patrons. On the other hand, I see a lot of insults towards the building owner. Calling him “Money Hungry” and whatnot. The truth is, while Baja is a fun place to go for young people, it’s a dump. I lived by it for a while and drunken college students pouring out of there throughout the night is a regular… Read more »

Yes, but the building owner and the restaurant owner are two different entities so you are not disparaging your favorite watering hole by calling the building owner names. In fact you are probably supporting Baja by calling him names because he is kicking them out. I think the landlord is making the right decision though. Screw keeping it positive anyway, this is business, they need the tough love to wake up and see the light. You even said yourself it is a dump, so I’m not sure why you are saying we should keep it positive. It is a dump… Read more »

Brett, my point is that people shouldn’t be calling the building owner names. Not because it would make Baja look bad, but because it’s counter productive. That accomplishes nothing and may even go against what people are trying to do. Which is convince the owner to change his mind. (Not “open his eyes”) I never said in my paragraph that this is “dumb”. Personally, if I were the building owner of Baja Bean and had offers from reputable companies to fill the space. I would do the same thing. By acting pissy and calling the one person who can change… Read more »

I didn’t say anything about “dumb” , I said you said “dump” d-u-m-P . You called it a “dump” and then said that “if you want to show support for you local watering hole” then “keep it positive.”
And you are right, they won’t last once they move, unless they find another hole to dark hole to crawl into somewhere near VCU and sell dollar beers, but I’m not sure that will be original enough by the time the reopen.

Sorry, Brett I read it quickly at work and misread your statement. But after reading comments and background from the owner of Baja, I’m pretty sure they have no choice but to move. The owner of the building has been trying to get rid of them for years. Money has never been the issue either because they offered to pay more. He just doesn’t want them in the same building as his law firm, which is understandable. I doubt that deleting messages from his email inbox will make any difference either. The way it looks, they are looking at the… Read more »

is this second grade? name calling? it’s an opinion. a description of what this situation “sounds” like, and the point is that i won’t support the new businesses, and i felt like taking 2 seconds to say that here. i know Baja extremely well, including the people who run it, as well as most of the places in the Fan. sure, they could clean it up. were they asked to? it’s just food, pun intended, for thought. duh, the other points made here make sense, some (irreverent?) anyways. it seems a general distaste for dive bars by some here. you… Read more »

You can be a dive and be quality. Look at Joe’s Inn, Commercial Taphouse, Bamboo Cafe, Sidwalk Cafe, etc. You are arguing two extremes. There is a middle ground. You don’t have to go from PBR to high end scotch. There is plenty of good in between. If Baja wanted to improve a sound business, then they should have done it a long time ago on their own. It is not the responsibility of the landlord to push them to do it or pay for it. It’s the least they could do for inviting half of Richmond over to puke… Read more »

Good call on being quiet, Rich…
The owner is being smart not wanting a dirty college bar in the basement of his law firm. But you all acting like a bunch of spoiled kids only goes against what I assume you are trying to do. Which is change the owner’s mind. Like someone else said, you don’t have to either be a complete dump, or Morton’s steak house. There is middle ground. Maybe you should sit the next couple of rounds out…

NOOOO DONT LEAVE BAJA. i love that place and all the workers