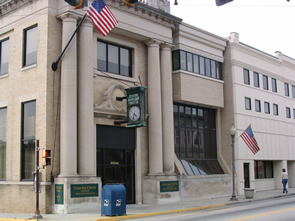 An out-of-town bank has the green light from regulators to build a branch near a proposed retail development in Chesterfield County.

Citizens Bank & Trust has received approval from state and federal regulators to open a location in Chester off of Iron Bridge Road/Route 10.

The bank is buying part of a six-acre parcel owned by Ches LLC, an entity affiliated with developer, homebuilder and contractor George Emerson and the Emerson Companies.

The land is just west of the Wal-Mart and DMV and will soon be developed, Emerson said.

“We’re getting ready to build a 26,000-square-foot retail center, and the bank is going in the front,” he said, adding that he’s collecting bids for construction work and hopes to break ground this year.

Headquartered in Blackstone, about 60 miles southwest of Richmond, Citizens Bank & Trust has three branches in the Richmond market: one each in Chesterfield (on Courtview Lane near the Chesterfield municipal complex), Amelia and Colonial Heights.

Joe Borgerding, chief executive of Citizens Bank & Trust, said the bank is looking at another location because the existing three have thrived.

“We’d looked around for quite a while and made an offer on the site,” Borgerding said. “We did a market study, and right there with the Wal-Mart and DMV it’s obviously a high-traffic area.”

The new branch joins a competitive banking submarket. SunTrust, Wells Fargo, Bank of Southside Virginia, C&F Bank, Village Bank, Bank of Virginia and Virginia Commonwealth all have branches within a two-mile radius of the new site.

But Citizens Bank & Trust is one of the few banks to break ground on a new location in recent years. As online and mobile banking have become more popular and reduced traffic at some branches, many banks have opted for the cheaper route of buying existing buildings for new locations.

“We’ve looked along that corridor for a long time, but nothing has been available,” he said.

“For a bank like us, it makes sense to move forward during this environment,” Borgerding said. “Land acquisitions and construction are at a point that they are a little more affordable.”

Borgerding said the bank hasn’t finalized the cost of the new branch, nor does it have a firm opening date.

Citizens Bank & Trust has 11 locations across Central Virginia and is part of Citizens Bancorp of Virginia, a $333 million publicly traded holding company. The bank turned a profit of $834,000 in the second quarter. It was founded in 1873.

Its three local branches control approximately $48 million in local deposits, about 0.07 percent of the total market share, according to the most recent figures from the FDIC.