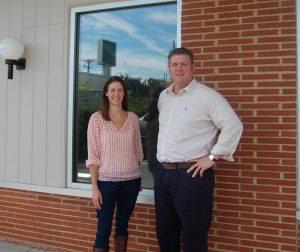 Haydon and Whitby in front of their soon-to-open shop.

Clarification: Cellar to Table will be a market within Yellow Umbrella’s new location. The seafood shop will continue operating under the same name once its makes the move to the new storefront.

Competition in the Patterson Avenue wine shop scene is heating up.

Kate Haydon and David Whitby are launching Cellar to Table, a market specializing in wine, cheese and seafood, near the intersection of Patterson and Libbie avenues.

Cellar to Table will operate within the pending new location of Yellow Umbrella, a seafood market owned by Whitby.

They’re currently building out the 3,200-square-foot shop and plan to have it ready by January. Demolition on the space at 5603 Patterson Ave. started about a month and a half ago.

With several other wine shops nearby, Cellar to Table will try to stand out by combining a wine shop with a long-running Richmond seafood market.

Whitby owns Yellow Umbrella, a seafood shop his father started three decades ago out of the back of a truck. A few years later, he moved the operation indoors, and he passed the business to Whitby in 2008.

The new store will expand on what Yellow Umbrella offers, Whitby said.

“We’re going in big on cheese, on wines,” he said. “It’s something I’ve been thinking about for a while, and this seemed like a great opportunity. I knew this was something Kate has always wanted to do.”

Wine racks, a butcher station and seafood displays will line the walls of the new shop, and an open case in the center will feature local cheeses and prepared foods. Haydon said she has reached out to several Virginia-based meat and cheese distributors, including a goat cheese maker from Charlottesville.

“I think we’re at a point now where people really want to know where their food is coming from,” Haydon said. “It’ll be a totally different experience from shopping at a Whole Foods or a Fresh Market.” 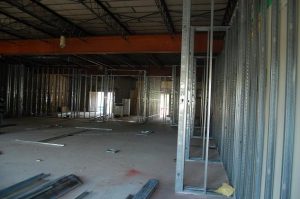 Work is underway on Cellar to Table’s interior.

Cellar to Table and the seafood market will occupy the original Yellow Umbrella storefront, which Whitby still owns. And competition isn’t far off.

Just blocks away on Patterson is the Barrel Thief wine shop. A few miles west is Corks and Kegs. And around the corner on Grove Avenue is J. Emerson Fine Wines and Cheese.

Haydon, a New York native, said Cellar to Table would specialize in the kinds of foods she grew up eating in her half-Italian family.

“To me, some fresh bread, cheese and a great bottle of wine — that’s the perfect dinner,” Haydon said. “It sounds like such a simple thing, but I’ve had such a hard time finding a store that offers all of that in Richmond.”

Haydon has about three years of restaurant management experience, and she most recently worked in the fundraising industry. With two daughters under age 3, she said she was nervous about giving up the steady paycheck.

“But I have a great support system at home, and this is something I’ve really always wanted to do,” Haydon said. “I think this is an established concept, and there is a customer base for this.”

Congratulations and we wish you the best of luck.

Can’t wait for this to open. Hands down, these guys sell THE best seafood in this area. In addition to the quality of their product, they are incredibly helpful and friendly. I know this expanded effort will follow those same principles and be a great success. Best of luck with the opening!