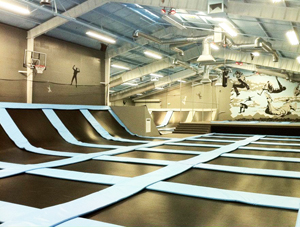 An example of a trampoline studio from one of Case Lawrence’s other businesses.

Two local women are jumping back into the business world.

Jumpology, at 10087 Brook Road in a former Mattress King building, will have 10,000 square feet of trampolines and a trampoline dodge ball court.

“I was in North Carolina visiting my sister and they have a trampoline park there,” Marcus said. “So I said, ‘This is something I’d like to see in Richmond.’

Marcus, a former health-care technician at Saint Mary’s hospital, toyed with the idea for three years, in part as a way to get back into the working world after spending 15 years raising two sons. She was visiting her sister when she stumbled across a trampoline park called Defy Gravity in Durham, N.C. As it happened, the developer of the facility was already looking in the Richmond area.

Case Lawrence, a Californian who runs three trampoline studios across the country, was scoping his next location.

“The people in North Carolina gave Case my information, so when he called he said he already had a place in mind in Glen Allen,” Marcus said.

Marcus and Larkin, a former MCV-trained dentist, will be 50-50 owners with Lawrence. The Richmond pair said they plan to finance their half of it. (They said they are talking to Wells Fargo but haven’t closed the deal.)

Marcus said they expect to attract people of all ages but particularly high school students. According to a release from Lawrence, jumpers will pay $6 to $12 per hour to use the trampolines.

Other sources of revenue will be a cafe, birthday parties, trampoline dodge ball tournaments, trampoline “aerobics” classes and weekend club nights with a DJ and laser lights called “JumpJam.”

Marcus said she planned to hire a general manager and 20 to 25 part-timers to run the jump joint.

Lawrence, a onetime office and industrial commercial real estate developer, hopped into the trampoline business in 2010 after his kids got hooked during a trip to see the San Francisco Giants.

“A few years ago they converted an old airplane hanger into one of the first of these trampoline parks, so I took my boys there,” Lawrence said. “They loved the baseball, but they wanted to go back [to the trampoline] three or four times.”

Lawrence opened his first trampoline park in Fresno in 2011, and it exploded, he said. For the second park he went to Durham, a market he knew because he attended law school at Duke University.

“After I had gotten that facility up and running, it was amazing how many people from Richmond were coming to visit,” he said.

Trampolines are not without their critics ? including the American Academy of Pediatrics, which has advised doctors to warn parents about potential injuries.

Lawrence said that there is an inherent liability risk to operating a trampoline business but that the risk is actually rather low.

“We have about two incidents for every thousand people who participate,” he said. “That’s better than football, basketball ? it’s better than bowling.”

The most common injuries are twisted ankles and “trampoline burn,” but people will sign a liability waiver before they do even one back flip.

Sounds like it could be awesome. Can’t wait to check it out.

What a great idea…Looking forward to them opening up!