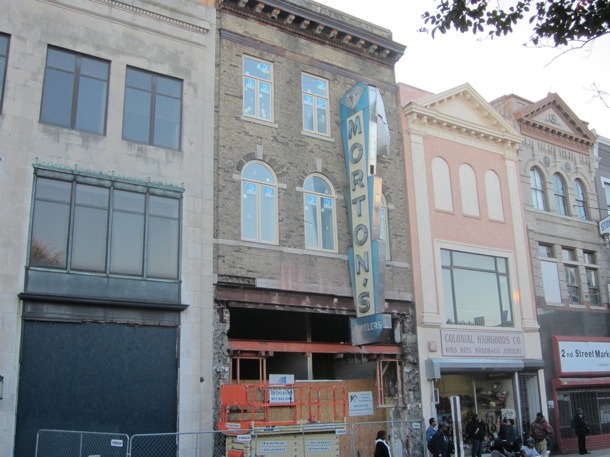 By early next month, there will be 24 more reasons to think that the East Broad Street neighborhood around the long-vacant Central National Bank is turning the corner.

Developer Mike Glass said his 24-unit apartment building at 213 E. Broad St. would be finished in early December. The building, which is next to the Art Deco-style Central National Bank, is in the final phases of a $3.6 million renovation financed in part by the City of Richmond.

Glass is working with Ron Hunt of Genesis Properties on the project.

Mayor Dwight Jones and his deputy for economic development, Peter Chapman, announced in April 2011 that the city was lending $250,000 to the project as part of the mayor’s push to turn the area into an arts district. The project is being financed in part by historic tax credits.

The area has been blight-ridden for decades, but developers have started to pour money into long-abandoned former businesses.

“For a lot of what we’ve done, we’ve been pioneers,” Glass said. “We like the neighborhood, and we’re very excited about the mayor’s attention and focus on the arts district.”

The Broad Street project is being financed primarily by Virginia Community Capital out of Christiansburg. The building is known for its large sign for Morton’s Jewelers, which Glass said has been closed for decades.

Rents at the East Broad property will range from $700 to $1,500. The space includes 3,000 square feet of commercial space to be used as artist’s studios, retail and offices, Glass said.

A block west, Monument Companies is developing the old Jefferson Bank building with local real estate attorney and developer Barry Wilton. That building is being converted into 44 apartments and will have ground-floor commercial space.

Chris Johnson, a principal at Monument, said he’s excited to see crews working on rehabs in that area.

“The more projects that can be completed in the area, the more residents it will bring downtown,” he said. “And that creates demand for more commercial projects.”

Mark Douglas, the latest in a string of commercial real estate brokers representing the Central National Bank building for owner and D.C. real estate mogul Douglas Jemal, said the development is driving down the vacancy rate.

“Going back about 10 years ago, downtown had a very high vacancy rate in Class B and C properties, but as more of those buildings are converted into apartments, it’s brought down those rates,” Douglas said. “That’s actually helped the office market tremendously.”

Douglas said the Central National Bank would eventually be converted, at least in part, into apartments.

“I’ve had many conversations with people about the possibilities in that building,” he said. “It’s eligible for historic tax credits, and you have a guy like Jemal as the owner. He’s got lots of money.”

Jemal also owns the old United Way building across the street from the bank building, which could be used as parking for the bank’s development.

I’ll be the first to call BS on the $700-1000 rent. They all say that. Then right as they go to market the rents jump. I’d expect $850 minimum for a 1br and closer to $1200 for the 2br (if there are any). I can’t wait til something is done with the CNB tower. Converting that to…well, anything but a vacant building, really…would be without a doubt transformative for the area. Douglas Jemal has a tendancy to hold a property vacant and in disrepair for years (up to a decade or longer) before developing them. Unforunately, his vacant buildings leave… Read more »

Proud that my employer was a partner in this! Thanks to Mr. Larter for mentioning them.

Jemal has not done anything but buy and sell (cookie factory best example) buildings since early 2000s in RVA. He has several buildings on Broad Street that are 2/3 finished and have been this way since Wilder was mayor. He has not even finished the apartment space above them.

As for CNB building. Yeah can’t wait to seem the try and redo the upper floors into apartments, The upper floors have some strange and open layouts let alone the challenges with getting adequate water and sewer into the space.