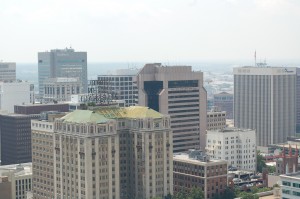 Downtown Richmond is a long way from having enough residents to attract big retail.

That’s according to Blount Hunter, head of the H. Blount Hunter Retail and Real Estate Research firm, who participated Tuesday in a discussion on how to bring retail downtown.

“There are 10,000 residents downtown,” he said. “That’s a village. What kind of retail would you expect to find in a village of 10,000 people in Hanover County?”

For example, Hunter said attracting a Banana Republic store would require more than 20,000 residents with a median income over $74,000 per year “spending every single dime” of their clothing budget at its store to justify a location downtown.

Hunter, who spoke at a breakfast meeting of the Greater Richmond Association for Commercial Real Estate, said Richmond should focus on building up a thriving downtown and that retail would naturally follow.

In the meantime, he said, Richmond should focus on boutique “experiential” shopping models, such as La Difference on 14th Street, rather than on big national chains.

Veteran retail broker Connie Nielsen of Cushman & Wakefield | Thalhimer said she thinks a mix of national and local tenants would be right for the downtown retail market. Nielsen said that the office market should be able support more downtown retail but that light foot traffic, public transit issues and blight have deterred retailers.

Thornton said offering people something they can’t find online would bring shoppers out.

He did express frustration with the lack of retail that supports the business community.

“I think Manchester would be a great location for a nice shopping center, maybe with a Staples,” Thornton said. “I mean, there are 70,000 people who work downtown. Where the hell do you find copy paper?”

Nielsen responded, saying, “I actually represent Staples, so sorry about that.”

If you want more people to move downtown, improve the Richmond City Schools so your middle class won’t leave for a surrounding county when they start families.

This is a great idea but how do you suggest it be implemented? Improving a school system isn’t something that can happen overnight. It, like all re-gentrification comes in phases, requires significant investment by a few risk-takers before the masses will follow. Richmond City already has a couple good elementary schools and there are residents staying through that age but then move out west for high school.

I agree with Drew. Like in any job, don’t announce a problem without a solution.

Shut down Grace Street and make it a pedestrian mall like Charlottesville has. They have a great mix of national and local much like Carytown. It only needs to be 4 blocks and you can keep the # streets open. We have these beautiful storefronts going to waste. It is one of nicest streets in town and no one is there but vagrants. There is momentum there with new restaurants coming in. Let’s capitalize on it. Then you would have a spot within walking distance from the convention center, the National, Center Stage, hilton, marriott and the John Marshall, etc.… Read more »

No offense, but this is really like the worst idea ever.

Pedestrian ‘malls’ (closed off streets) RARELY work. Charlottesville being the oft-cited example of an exception.

I’m really not concerned about this news because I used to shop at Banana Republic back in 83′. How about H&M…that’s a little more in style.

There are things a developer can do, and there are things that only a city can do. Richmond should be building parking decks. Three in the broad/Grace street stretch and two in Shokoe bottom.

If you look at successful revitalized downtowns like Charlottesville, you will see that the city stepped forward to build parking that made the redevelopment possible.

And if you look where revitalization is happening in Richmond, it is clustered around parking. Say it again. Parking.

Schools are important, but that’s now what’s holding back downtown, which is primarily attracting childless residents.

I agree with Brett… A primary focus needs to be on Grace St. That stretch of empty storefronts near Centerstage should definitely become pedestrian only. I really do think that if an established national brand (Target, Ross, others) set up shop in that section of downtown that people would come. While I don’t live in the 10,000 person “village” referenced in the article I would sure prefer shopping there than to the counties. Folks from Church Hill, Northside, Fan and Southside, for example, would shop downtown in addition to the residents who live there. So, I’m having difficulty agreeing with… Read more »

A city is not made for driving, it is made for walking. Parking garages are not the answer. The article is right when it states that once we have enough residents in the downtown area, commercial spaces will naturally begin to fill. Grace Street already being a prime example of that–hopefully the momentum will continue. Not only does local government need to play a roll, but so do the citizens. Make it a point to go downtown and support the already established businesses, and I bet you will find that parking is barely an issue. Unless you count parking a… Read more »

Earth to commentators: Grace street already has plenty of parking decks and lots. There is a city lot across from the Hilton Garden Inn, and another across from CenterStage. There is another city parking deck further down Grace on the corner of 2nd street. Additionally, there are at least three large parking decks within one block of that section of Grace street- and the convention center parking decks! The last thing that area needs is more parking.

Tommy is right and if you have been here long enough there was a HUGE deck of parking in what was the Atlantic Life building on Grace across from old Thalhimers. It was to replaced when it came down in 2000 but there is not enough demand (although that has changed) or money. As for national retailers or stores like H&M, to say it is a village of 10,000 yeah with a suburb (as a joke) of 30,000 fairly high income residents just to its west in the Fan and some what 10,000 kids on campus at VCU. If you… Read more »

These experts are obviously SUBURBAN real estate experts. Theyre comments should be completely ignored. A village in hanover does not have 70,000 daily workers. A shopping center is the last thing that is needed. Im sure his vision is for it to be surrounded by acres of ugly surface parking. Clothing stores are a good idea but there are many choices other than banna republic. As others have said there is plenty of parking suburbanites are lazy and if they cant park right at the front door of something they complain.While its great to have this discussion, a very poor… Read more »

Joe–key word in your comment is WORKERS. A vast majority of the people that are in our downtown area… and maybe we are all talking about a different space… I believe this area to be east of Belvidere… leave the city after 5 o’clock. So yes, while we have all of those workers in the city, they still go home (out side of the city) to do their shopping.

I think retail, done right, downtown would be a hit. I would love to see whole foods anchor a downtown shopping district with a mix of a few national chains and local shops. People from the near west end and fan would muuuuch rather go downtown to shop than Short Pump.