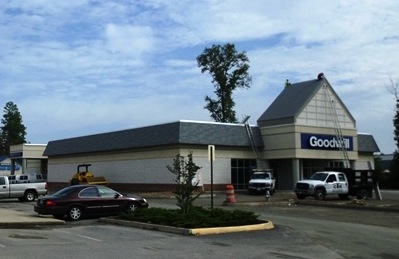 The new store in Woodlake. (Photo courtesy of Goodwill)

A local nonprofit is expanding its retail empire.

Goodwill Industries of Central Virginia is set to open its 13th Richmond area thrift store Thursday. The new location is at 14740 Hull Street Road in Woodlake, a part of Chesterfield County.

The nonprofit purchased the land from Honda House, a nearby motorcycle dealership. Funding for the store came from a $15 million bond package the Virginia Small Business Financing Authority issued in 2010.

“In this scenario at Woodlake, purchasing the land and building the store from the ground up was the most cost-effective approach,” Goodwill spokesperson Ellen Thornhill said. The cost “is roughly equivalent to what we would spend on a 10-year lease of a similar space.”

The 16,000-square-foot Woodlake store is the latest in a line of retail spaces the nonprofit has opened in Central Virginia and Hampton Roads.

Thornhill said Goodwill plans to open another store in Goochland in January and a career support center in Hampton Roads next year.

“Our main goal is really to help people get to work,” Thornhill said. “We serve people [who face] some kind of obstacle that makes it hard for them to find employment. It could be a physical or intellectual disability, a child-care issue or an unexpected layoff.”

Thornhill said the retail locations also provide entry-level jobs for Goodwill clients. Between 18 and 22 people will work at the Woodlake store.