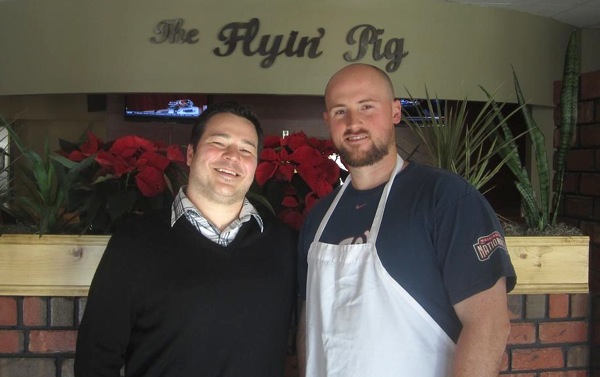 After almost 10 years in the making, that day has arrived.

The Chesterfield natives on Tuesday opened the Flyin’ Pig Backyard Grill in the Waterford Shopping Center near the intersection of Charter Colony Parkway and Genito Road.

They’ve been dreaming about going into business since their days at Clover Hill High School, about two blocks from their new restaurant at 13560 Waterford Place.

“We’ve been talking about this restaurant thing for so long that we eventually started saying we’d open a restaurant when pigs fly,” McGrath said. “And here it is.”

The restaurant will feature such cookout favorites as barbecue, grilled chicken, hotdogs and hamburgers.

“We are going to have a wide variety of food,” said Rogge, 29. “Barbecue is very popular, but it’s also a food that people have definite ideas about what they like. Some people will say, ‘well, I only like Carolina-style barbecue’ and won’t even try anything else.”

Rogge, who most recently worked in the kitchen at Q Barbecue, is the chef for Flying Pig, and he developed four sauces for barbecue lovers of all stripes: Alabama white, Kansas City-style, North Carolina-style and Buffalo-style.

Neither Rogge nor McGrath, 28, started their careers as restaurateurs. Rogge, a UVA graduate, began his career in finance as an analyst, and McGrath, a VCU alumnus, started in commercial real estate.

“It wasn’t really for me,” McGrath said. “Right after I graduated in 2008, I was offered a job as assistant manager at Bar Management Group, so that’s when I made the decision to go into restaurants.”

McGrath worked at the recently closed Blackfinn in downtown Richmond and in other BMG restaurants in Washington. All the while, he and Rogge kept in touch, refining their vision of opening a place of their own.

Rogge did stints at the upscale Arlington restaurant Eventide and former Fan restaurant Six Burner while the pair developed their own concept. They looked at spaces downtown but decided on the Chesterfield location.

“When the space became available, we realized that it was a place where we had a familiar customer base right off the bat, which is a huge advantage starting out,” McGrath said.

Rogge and McGrath financed the restaurant through savings and investments from friends and family. The space was most recently a Mexican restaurant named Jalapenos.

“We spent a lot bringing what was here up to standard,” McGrath said. “The tables and chairs were here, but we did a lot of painting and bit of remodeling. We did have to buy about 99 percent of our kitchen equipment, including a customized smoker. It’s sweet.”

The restaurant is waiting on its ABC license and plans to keep the joint open late as a bar in the evenings and host karaoke and trivia nights during the week and live music for weekend happy hours.

I live about 5 minutes away (in Watermill) and I definitely plan to check out The Flyin Pig.

I lurve me some good, homemade BBQ!

Don’t they know that restaurants can’t survive these days because of Obama’s onerous anti-barbecue policies? Maybe they should try cupcakes!

Is it wrong that it’s just after 9am and this article made me work up a craving for something barbecued, smoked, or grilled?!

Congrats! The best of luck to you! Sounds great I’ll have to try it out…

We can’t wait to try it. But, PLEASE have some exciting SIDES,,, not just FRIES.. boring.
Homemade coleslaw is a must, but other FUN sides….

Great !! My hubby is a big fan of BBQ!!
I hope you have exciting SIDES, HOMEMADE coleslaw is a must, but OTHER FUN sides… not just French Fries.. duh, you can get those anywhere!
Congrats!

Killer B-B-Q ….. never had pulled chicken and WOW …. and the sides were the best of any B-B-Q place i’ve ever eaten ….. Good Luck Guys

Kevin- havent seen ya in a long time, good luck with the BBQ joint!

My husband and I were the second customer when The Flyin’ Pig opened Monday, we were back again Wednesday and we will be back many more times. The barbecue is so good. The sides are also good and the fresh squeezed Limeade is to die for. I’m sure the fresh squeezed Lemonade is equally as good but I’m partial to limes.

Hey if you decided to expand, the old Smokey Pig in ashland is still available.

Be warned: make certain to chew your food well and to swallow completely before giving in to your emotions. I almost choked twice during my first visit; once from crying tears of joy during that first perfect bite, then again whilst singing praise to the angels above for the perfection that had just graced my palate with its presence. It was like experiencing “delicious” for the first time all over again… only better.

I love barbeque and this is definitely barbeque to love. Great sides with a different twist on flavors.

I cannot wait to try everything at this restaurant! I’ve known Kevin for years; he’s funny and sociable and an ideal restaurant owner. And I’m sure Steve is an excellent cook. I will definitely be going there a lot once I’m home for winter break! I’ll be sure to bring all my friends as well. 🙂

Best of luck to you guys! I am anxious to try it, your reviews sound great!!!

Went on 3-2 and it was delicious. I didn’t have the ribs that everyone is screaming about but I enjoyed the Southwestern Frito Salad with smoked chicken. So good! Also loved the hush puppies with cheese inside and that relish. Our party all enjoyed the delicious food. Oh and thanks for supporting CHHS’s art students. Its always nice to have another venue to show off their talents!

Can’t believe a little tyke from Walton Park neighborhood has created such a great BBQ place.