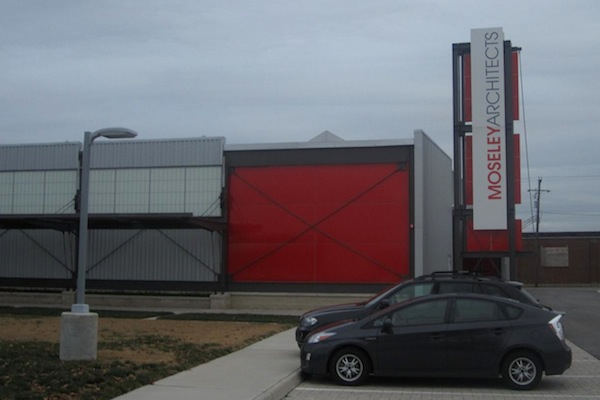 The Moseley headquarters at 3200 Norfolk St. in Scott’s Addition. (Photo by David Larter)

Two architecture firms have decided it’s better to weather the storm together than to go it alone.

Richmond-based Moseley Architects merged with Fairfax-based BeeryRio in a deal announced Monday. The move adds 17 people to Moseley’s ranks, bringing its headcount to 173.

Moseley Vice President Lisa Demmel said the firm wanted to expand its presence in the Washington area and in the senior housing sector, which was a focus for BeeryRio.

“It was an opportunity to add a portfolio in an area we know absolutely nothing about,” she said. “We’ve been so entrenched in the public sector that, when the economy takes a nosedive as it has done, it opens up a new area for us and allows us to diversify.”

No cash changed hands in the merger, Demmel said.

Government cutbacks have hurt both firms, Demmel said, and their combined experience will help stabilize the firms going forward.

“Both of us have worked extensively in K-12 education, so we’ve crossed paths often,” Demmel said. “This seemed like a natural step for us.”

Its headquarters at 3200 Norfolk St. in Scott’s Addition will continue to be the combined firm’s home base.

Moseley did about $33 million in revenue this year. BeeryRio generated about $3.2 million.