A VCU political science major is diving headfirst into the bikini industry.

Lisa Opie co-founded Vizcaya Swimwear with business partner Franz Orban in April. Opie said the company’s bikini line has taken off thanks to her connections in the beauty pageant world, and now the pair is looking to South America to start manufacturing the suits by the end of the year.

“At first, I was designing and making all the pieces by hand,” said Opie, 21. “But it got to a point where I couldn’t keep up with demand.” 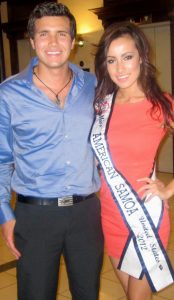 Orban and Opie will fly this week to Peru to scope out a factory that could produce the first Vizcaya collection. The line – named after a street Opie lived on in Barcelona – will be available on the company’s website in March.

“We’re working with two different factories now, trying to see which one will give us the best results,” said Orban, an electrical engineer who grew up in Peru. “There are some really high quality textiles available in Peru.”

The suits will retail for between $75 and $200 once they’re available online. Opie designed 21 looks for the collection and will start by producing about 500 bikinis.

Orban self-financed the startup. He said he invested about $10,000 in materials, permits and manufacturing costs.

Opie’s been modeling and showing in pageants since she was 14 and represented American Samoa in the 2012 Miss United States Pageant. But making the pieces for Vizcaya was her first attempt at design.

“It was a lot of trial and error,” Opie said. “Some of the first ones I tried to make were terrible, but I got the hang of it.”

Opie said the designs picked up steam quickly because of her connections in the pageant world. They’ve already shown pieces at the New York and Miami swim weeks, and next year Vizcaya will sponsor the Miss United States pageant.

The company is targeting woman between the ages of 18 and 27 who want a more sophisticated piece of swimwear, Opie said.

Their plan eventually is to move the company to Miami.

Opie is set to graduate from VCU in May and plans to focus on the company full time.

Why have they chosen South America to manufacture their product, then sell them to us in the United States? I am sure these students are Obama supporters, therefore they should be supporting his position of keeping jobs in the good ole USA.

Because Franz is from south america..

Tom, considering that Lisa is an honors student in political science, I think she could explain to you in searingly exquisite detail the idea of comparative advantage and the economic benefits of outsourcing.

Felicia, I really don’t need a course in comparative advantages of outsourcing,as I support it just as I supported the outsourcing of Bane Capital…remember that?. Most liberials don’t practice what they preach, that is my point.

I’m a conservative myself so I’ll be the first to point out that if richmondbizsense.com is your medium for saying dumb things then I’m glad it’s these two VCU kids with this company and not you.

Tom, Have you considered you have no point at all? Your point is based on that maybe they voted for Obama and further more that they voted for Obama specifically because he supports american business. They could have voted for Romney, voted for Obama because they support his views on raising taxes on the rich, or they like the direction the country is going, or maybe they are just apolitical and did not vote at all, any of these and it pulls the rug right of your argument. Go stand outside of the abortion clinic and try to get the… Read more »

I’m sorry did someone say something? My mind drifted sometime just after reading the headline.