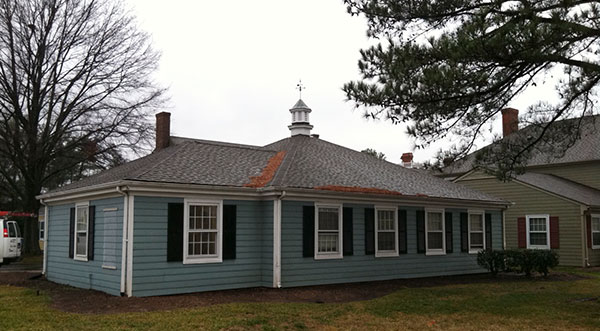 The planned StellarOne location at Gayton and Gaskins roads. (Photo by Michael Schwartz)

A Christiansburg bank is one step closer to getting its second Richmond location up and running.

StellarOne Bank received approval recently from the state’s Bureau of Financial Institutions to open its new branch at the corner of Gayton and Gaskins roads in the Far West End.

Renovations have begun at the property, and all that remains is getting the go-ahead from the Federal Reserve, a hurdle StellarOne spokesperson Angela Ross said the bank expects to clear.

It is aiming for an opening date of early April for the branch, which sits at 9605 Gayton Road and would give the bank visibility at the busy intersection of Gayton and Gaskins roads, across from the Gayton Crossing Shopping Center.

J.A. Heisler Contracting Co. is handling the build-out of the branch.

The branch is small – about 1,500 square feet – and StellarOne likes it that way.

Ross said the branch would use a “universal banker” concept in which there are no traditional teller lines and all branch employees can handle all transactions, from loans to deposits. StellarOne’s first Richmond location, which opened in August at the corner of Libbie and Patterson avenues, was the testing ground for the concept.

The model allows the bank to target smaller properties as it continues its planned expansion in the Richmond market.

“Fewer and fewer people go to a branch regularly,” Ross said. “People bank online, bank on their phone, bank on the ATM. We still have to have a branch, but we don’t see the need for large locations. There are only some locations that are available and that are small enough for what we’re trying to do.”

Josh Gehring, StellarOne’s head of retail banking, said the $2.9 billion bank continues to search for its next branch in the market. It has said its first wave of openings here would likely consist of three locations.

StellarOne’s publicly traded holding company, StellarOne Corp., is based in Charlottesville. It has more than 50 branches across the state. One of its main competitors in many markets across the state is Richmond-based Union First Market Bank.

Before building a branch presence in Richmond, StellarOne had employees in commercial lending, wealth management and mortgage operations based on Westerre Parkway near Innsbrook.

More reading: Why 2012 was a turning point for Richmond banks