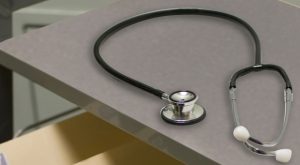 The type of copper-infused countertop to be tested. (Courtesy of EOS Surfaces)

A Richmond company that once sent its germ-killing socks to men trapped in a Chilean mine is targeting a somewhat more accessible market.

Cupron, a 12-year-old downtown firm that developed a bacteria-killing copper compound, has a deal to test its products in two Norfolk hospitals. The company will get to try its technology on a variety of items, such as gowns, bed sheets, countertops and workstations.

The goal is to protect patients against infections, said Cupron chairman Paul Rocheleau.

“You don’t know they’re there,” Rocheleau said of the copper compounds. “But they work in the background to kill bacteria that lead to infections.”

The hospitals are Norfolk General and Sentara Leigh, operated by Sentara Healthcare. Sentara Leigh, which is undergoing a major renovation, plans to install 15,000 square feet of Cupron-enhanced materials in its workstations, bathrooms and counters.

Ken Trinder, chief executive of EOS Surfaces, said the Sentara study would be the first large-scale, real-world test for the company’s technology.

“This is going to take a long time to play out,” Trinder said. “Every step is going to be very accurate and very controlled. But we’re cautiously optimistic.”

He said the copper-enhanced technology has massive potential market. Any institution where large numbers of people gather – such as hotels, restaurants or prisons – could benefit from an added layer of protection, Trinder said.

“It’s very difficult to get your head around all the opportunities where this technology could make a difference for people,” Trinder said. “We’re not sure yet where the market ends.”

Rocheleau said the Sentara study would be a good way to measure installation costs against potential health benefits. He said it would cost about $1.5 million to outfit a 250-bed hospital with Cupron-infused furniture, countertops and linens.

Infections acquired in health-care settings cause about 100,000 deaths and cost more than $37.5 billion a year, according to data from the Center for Disease Control.

Cupron conducted a small-scale clinical trial in Israel, where the company launched in 2000. Rocheleau said the results were promising.

“We saw significant reductions in almost every class of infection that the hospital tracks, which resulted in improved patient health,” he said.

Cupron moved to Richmond in 2008 and set up shop in the Biotechnology Research Park on East Leigh Street.