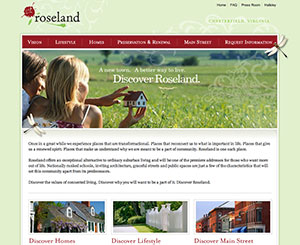 Stuck in bankruptcy for almost two years and with its lenders pushing for foreclosure, a massive stalled development in Chesterfield is once again changing its game plan.

The developers of Roseland last week filed a new Chapter 11 reorganization plan that, if approved, would look to split the property’s 1,300 acres into parcels that could be sold to other builders and developers and finally get Roseland’s lenders paid off.

The plan was proposed after lenders and the two bankrupt entities that own the bulk of the land at Roseland were unable to resolve their differences in a yearlong mediation.

Roseland, which encompasses land that sits just southwest of Route 288 and Woolridge Road, was conceived more than a decade ago by developers Buddy Sowers and Casey Sowers. It was put into bankruptcy in 2011, when lenders didn’t renew certain loans and the project was threatened with foreclosure.

Bruce Arkema, an attorney with DurretteCrump who is representing Roseland, said the new plan was crafted with the demands of the lenders and creditors in mind.

“The original [reorganization] plan had the Sowerses developing all of the land over a period of time,” Arkema said. “Most of the banks didn’t want to wait a long period of time to get their money. We’re asking them to wait a year or so.”

The developers are proposing to shepherd county zoning modifications on the property that would allow infrastructure to be built out on individual parcels.

“That would make the sub-parcels more attractive to a buyer or another developer,” Arkema said.

If and when those zoning approvals go through, the developers would ask lenders to wait one year while the parcels are marketed and potentially sold. Should sales not materialize, lenders and creditors would have the option to take over the deed on their share of the land or foreclose.

Some of Roseland’s lenders might not let things get that far, however.

At least three lenders on the project – having gone unpaid for years – are pushing for court approval to foreclose on pieces of the development.

Franklin Federal Savings Bank, the largest lender on the project, last week asked the bankruptcy judge to grant it the ability to foreclose on more than 300 acres of Roseland. The bank is owed almost $20 million on the project.

Robert Canfield, an attorney with Canfield, Baer & Heller who is representing Franklin Federal, did not return a call by press time.

Virginia Commonwealth Bank has asked to foreclose on about 100 acres at Roseland.

And HHHunt on Wednesday filed a similar motion, demanding that Roseland begin making payments on $6 million owed to BB Hunt LLC, an entity tied to HHHunt, or that Hunt be allowed to foreclose on the property. It has a security interest on 30 acres at Roseland and argues in its motion that there is no equity on the property.

“In Hunt’s view, this amended plan and disclosure statement also contain serious flaws and deficiencies that Roseland will not be able to cure, not the least of which is feasibility,” it said in its filing.

Vern Inge, an attorney with LeClairRyan who is representing Essex Bank in case, said his client is holding out some hope.

“Essex Bank is still hopeful that there’s a good consensual resolution for Chesterfield County, the borrower and all the banks,” he said.

Arkema said his clients believe there is equity on the land.

“There is substantial equity if you take the appraisals we had pre-petition [prior to the bankruptcy filing],” Arkema said. “We roughly thought there was about $90 million [in the value of the land] and owed roughly $45 million. Who knows today, but we think the market is turning.”

Roseland’s first reorganization plan, submitted in October 2011, asked some lenders to wait up to five years to get their money back while lots were developed and sold by the Sowerses. That plan was designed to generate income to repay lenders all of what they are owed, plus 4 percent interest.

The grand plan for Roseland was unveiled prior to the real estate crash and was to include more than 5,000 homes, more than 1 million square feet of office and retail space, and a town center.

According to the Roseland website, homes there were originally supposed to be available beginning in 2010. Single-family homes, the website said, were to range from less than $200,000 to multimillion-dollar estates. The plan also called for rental properties, including penthouse condominiums in Roseland’s Old Town.

The proposed zoning amendments wouldn’t affect the types of development that have been approved for the land.

“The overall use of the property – that vision hasn’t changed,” Arkema said. “It’ll be a mix of commercial, high-density and single-family.”

Should the property be split up and sold off to separate builders, Arkema said the Sowerses would still look to be involved in some of the build-out.

“They will still try to pair up with other developers or builders to buy a district,” Arkema said.

A hearing to begin considering the new reorganization plan is set for this month in federal bankruptcy court in Richmond.

Chesterfield County should be viewing this one with great interest……they don’t need ANOTHER messed up (neighborhood) development.

This project of all projects stalled over the last 10 years should get the go ahead.
Roseland is the model for future development in the region.