Doughnuts and ice cream can get messy.

The owners of 10 Central Virginia Dunkin’ Donuts and Baskin-Robbins stores, including seven across the Richmond area and three in Fredericksburg, have been sued in federal court after allegedly falling behind on franchise fees and rent payments. 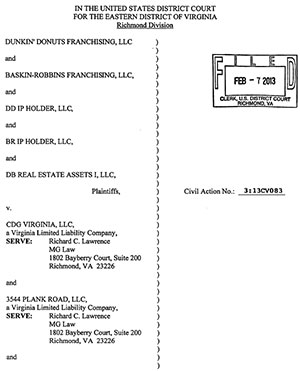 Dunkin’ Donuts and Baskin-Robbins on Feb. 7 sued a dozen LLCs that own the franchises, alleging trademark infringement and demanding they cease use of all branded items and signage.

All 10 stores remain open for business, said Sandy Tucker, a Richmond attorney with the law firm Williams Mullen who is representing Dunkin’ Donuts and Baskin-Robbins.

“Talks are ongoing to try to settle the affair,” Tucker said. “Dunkin’ doesn’t have any desire to close stores. And we hope that something can be worked out, since this is primarily a matter of money.”

The ideal resolution, Tucker said, would be to get his clients the fees they say they are owed and allow the franchise locations to stay in business with the Dunkin’ and Baskin-Robbins names.

Tucker said the suit is part of the companies’ attempt to enforce the termination of the franchise agreements on the 10 locations, which was carried out over the past few months after the franchise owners missed fee and lease payments.

BizSense was unable to reach the owners of the franchises. Richmond attorney Rick Lawrence of MG Law is listed as the registered agent for most of the franchise entities. He did not return a call or email by press time.

Based in Canton, Mass., Dunkin’ Donuts and Baskin-Robbins sold the franchises in question between 2006 and 2012, the most recent being the Carytown location late last year.

The owners agreed to pay weekly franchise and advertising fees based on a percentage of gross sales at each location.

They defaulted on the terms of their franchise agreements when they began to miss fee and lease payments on some of the locations, the suit claims.

Dunkin’ Donuts and Baskin-Robbins made further demands for payment in December and January and then terminated the franchise and lease agreements.

Despite terminating the agreements, which would forbid the stores from using the Dunkin’ Donuts or Baskin-Robbins names, all 10 stores are still flying the brands’ flags.

“Normally, if they can come to terms, they would reinstate the agreements and go forward,” Tucker said. “If it can’t be settled, then, yes, we’d be looking for an order that essentially shuts down the operations and remove all the Dunkin’ Donuts and Baskin-Robbins marks.”

Shop local people. Richmond pushed out Ben and Jerry’s in favor of Bev’s… You’ve got Dixie right down the street from here, show them your love by not patronizing corporate, frozen, franchised nonsense.

Dixie and Dunkin are two completely different styles of doughnuts and cater to different markets. I like Dixie, don’t get me wrong. But they are specialty donuts in the same category as Carytown Cupcakes (and carry a specialty price). If I want just a special treat for myself, I go to Dixie. If I need 2 dozen to take into work, I go to Dunkin.

charles, the zips that “switched” to henrico, va (including 23226) can still use richmond if they chose so.

Yes, but body of the complaint states that the registered office and registered agent are located in the City of Richmond.