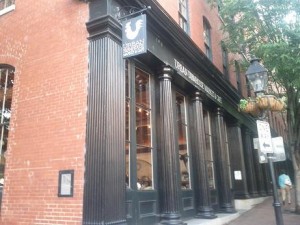 Urban Farmhouse isn’t letting any grass grow under its feet.

The local cafe, fresh off opening its second location, has plans to launch two more stores this year.

“We’ve been looking in the West End, but it’s been difficult,” owner Kathleen Richardson said. “The real estate is expensive, and we’re still a small operation, so it’s been hard to find the right location.”

Richardson on Feb. 8 opened an Urban Farmhouse location at MillWorks at the Green, a development near Midlothian Turnpike and Woolridge Road. The 2,200-square-foot space is almost 50 percent larger than the original location in Shockoe Slip.

“We try to be a neighborhood-focused restaurant, so we think Richmond can support several locations,” Richardson said.

In addition to scouting for new spots, Richardson said she is working on plans for an Urban Farmhouse food truck and foresees expanding outside of Richmond, possibly to Charlottesville, Fredericksburg and Williamsburg.

“Right now we’re proving that the brand has growing power,” she said. “I think we’ve definitely seen that so far.”

Urban Farmhouse opened in 2009. Richardson spent 20 years working in marketing for giants of the restaurant industry, including McDonald’s, Starbucks and Panera.

Why not one on Broad St downtown??

They are already on Cary Street downtown, they won’t be going there. The only possiiblity for another Urban Farmhouse in the city would be in the Fan.

There is a big empty space in the Twin Hickory Shopping Center. There is nothing like it in the area.

I second the Twin Hickory recommendation. There are no healthy options in the area other than Subway.

That’s probably a little too close to their current location.

Plenty of great space just a couple of doors from Starbucks at Libbie and Grove! We would love to have you in this neighborhood.

Congrats on the success of Urban Farmhouse !
In working with you on the early concept and equipment packages I knew your enthusiasm and vision for Urban Farmhouse would see it through to success eventhought there were several fianacial doubters at the time.