Nancy F. Langston, dean of VCU’s School of Nursing, will retire this summer. Under Langston’s leadership, the school’s enrollment doubled from 444 students in 1991 to almost 1,000 today. A national search for her successor is nearing completion. 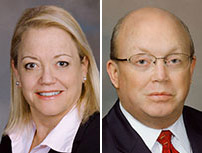 Peggy Tyre and Ken Kelly joined the newly formed Franklin Federal Mortgage Center. Together they have more than 45 years of experience in the mortgage industry. The new subsidiary offers a wide selection of loan programs, ranging from conventional and jumbo mortgages to Federal Housing Administration, Veterans Administration and Virginia Housing Development Authority loans.

Dan Peifer joined First Community Bank as a mortgage loan originator. He was previously a loan officer with Union Mortgage Group and spent 20 years with IBM.

Matt Anderson has been promoted to assistant vice president at CBRE|Richmond. Anderson joined CBRE in 2006. Anderson has served as the president of the VCU Massey Cancer Center Massey Alliance Board, currently serves as chairman of the Richmond chapter of Ducks Unlimited and has been active with the Collegiate School and Hampden-Sydney alumni associations.

Theresa Kostrzewa joined as a lobbyist. She has more than 19 years of government relations and government procurement experience. Kostrzewa is ranked as one of the state’s 10 most influential lobbyists by the North Carolina Center for Public Policy Research.

Angel Sams also joined the firm’s Raleigh office. Sams has worked as a lobbyist alongside Kostrzewa for the past two years and attended Loyola University.

David Brat joined Mangum Economic Consulting as a consulting associate. Brat is chair of the Department of Economics and Business at Randolph-Macon College. Brat attended Hope College, Princeton Seminary and the American University in Washington.

Ann Payes joined as executive director. She has more than 15 years of experience in nonprofit management and was most recently with the Virginia Home for Boys and Girls. She attended the University of Virginia and William & Mary.

Rachel Antrobus joined as a board member. She is a CPA working as a consultant with small- to middle-market companies in Richmond and has experience volunteering with at-risk youth through Girls, Inc.

Blair Baud joined as a board member. She has been with Capital One for 13 years, currently serving as vice president of operational risk management. Baud attended the University of Alabama.

The Richmond Fisher House Foundation announced its 2013 board:

Martin P. Klein has been promoted to executive vice president of Genworth. Klein will continue in his role as chief financial officer. He has more than 30 years of industry experience.

F. Gerard Moeller has been named division chair of addiction psychiatry in VCU’s psychiatry department and will hold a joint appointment in the Department of Pharmacology and Toxicology. Moeller comes to VCU from the University of Texas Health Science Center at Houston.

Terry L. Taylor has been named vice president of the Virginia Veterinary Medical Association’s board of directors. A retired veterinarian for the U.S. Department of Agriculture, Taylor attended the Ohio State University College of Veterinary Medicine.

Tony Russell joined the Virginia Lottery as director of administration. The position oversees lottery security operations, licensing, purchasing, facilities and human resources. Russell has almost 25 years of experience as a senior manager and regional director with FedEx and Kroger.