A Richmond firm known for its hotels is getting into the mixed-use development business. 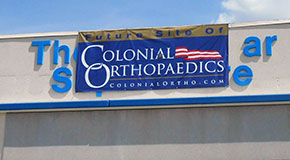 Shamin is looking for another medical tenant in addition to Colonial Orthopaedics.

“The great thing about car dealerships is they have these big lots, and a medical office isn’t going to use all those spaces,” said Shamin chief executive Neil Amin. “So we are going to use some of the extra space as out-parcels.”

Shamin, which owns 31 hotels in the area, bought the properties at 325 and 445 Charles H. Dimmock Parkway last year. They were previously Dominion Chevrolet-Buick-Cadillac Southpark and Priority Nissan. Both buildings were owned by Dominion Auto Group.

Shamin and its tenant Colonial Orthopaedics in October bought the old Dominion Chevrolet building and the nine surrounding acres for $2.6 million.

Amin said that the build-out is still in the design phase and that he did not know the final development costs for the 59,000-square-foot building.

Shamin paid $1.8 million for the Nissan property at an auction in December. The 16,400-square-foot building sits on six acres. Dominion had leased it to Priority Automotive before it moved to Chester.

Amin said he is looking for another medical tenant for the Nissan space.

Between the two properties, Amin said he could create about five out-parcels.

“We’ve had significant interest, and we’re finalizing an agreement with one restaurant now,” he said.

The surrounding area is packed with big-box retailers. Walmart, Target, Staples, Sam’s Club and Southpark Mall are within a three-minute drive of the properties.

Also nearby are three of Shamin’s Colonial Heights hotels: a Hampton Inn, a Hilton Garden Inn and a Holiday Inn.

Dominion Auto Group closed its dealerships in 2010 in the wake of the GM bankruptcy, when the company terminated its agreements with Dominion Southpark and hundreds of other franchises.

Dominion Auto Group chief executive Ted Linhart said his company used the money from the sale of the two properties to buy into two Sears Auto Centers: one in Hopewell and one at Willow Lawn.

“We didn’t take the money and put it in a mattress. All that and more has gone back into our long-term commitment with Sears,” Linhart said.