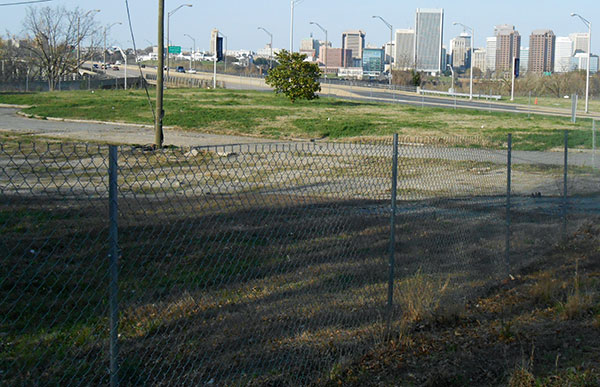 The site of the future Belle Summit Apartments. (Photo by David Larter)

The bulldozers will soon be humming at Manchester’s latest apartment project.

Belle Summit Apartments, a 50-unit, 72,000-square-foot development on the south side of the Lee Bridge is getting ready to break ground.

“It’s going to be another couple of weeks before you start seeing a lot of heavy activity,” said Garry Hammond, principal at Bridgeland Development, the Atlanta-based developer of the property. “It’s a 12-month construction window, and we want to have it open by the end of April, early May of 2014.”

The $8.8 million project at the intersection Cowardin and Springhill avenues is financed by Virginia Housing Development Authority and will target low-income tenants for the low-income tax credits. Bridgeland applied for its special-use permit on the project in September.

Hammond said that Bridgeland Agile Construction, a division of Bridgeland Development, is the general contractor but that there are sub-contractor opportunities available.

“We’re still getting our subs all lined up,” he said. “The project hasn’t been bought out yet.”

The project is near another planned development that has been stalled since 2008 and was put up for sale last week.

Manchester on the James, a development owned by North Carolina-based Northwood Ravin, is being marketed by Cassidy Turley. It was conceived by Crosland but was sold to Northwood Ravin in 2011.

Manchester has been a hotbed for apartment developers. There are more than 625 apartments that are finished, under construction or in the planning phase on the south side of the James River.

There are 300 units at South Canal and Miller Manufacturing in the works, as well as 152 apartments at the corner of Bainbridge Street and Commerce Road called Hatcher Tobacco Flats.

Recently completed projects in the area include 39 apartments at Manchester Motorworks, 49 units at 909 Perry and 188 units at the Links Manchester.

The photo in this article is not the future site of Belle Summit as stated in the picture caption. That is a photo of the previously proposed Manchester on the James site.