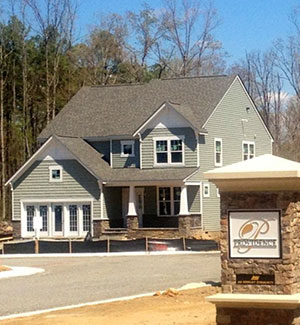 A model home at the planned Providence development in Ashland. (Courtesy of HHHunt)

One of the area’s biggest homebuilders has landed in the center of the universe.

HHHunt is putting the finishing touches on the model home for a 160-house, 63-acre development called Providence off Interstate 95 near East Patrick Henry Road in Ashland.

Dan Schmitt, head of the firm’s communities division, said the development has been in the works for some time.

“We’ve been working on this for about a year and a half, going through rezoning, planning and approvals,” Schmitt said. “We closed on the land in January and immediately began working on the property.”

The firm bought the land for about $1.6 million, according to Hanover County records. Infrastructure and improvements to the land will cost about $7 million, Schmitt said.

Schmitt said the firm would share building duties with Ryan Homes, another major builder in the area.

“The development is divided up generally by lot size,” Schmitt said. “HHHunt is taking the smaller lots, and [the houses] will be little less expensive. Ryan Homes’ lots are about 10 to 15 feet larger.”

About seven houses in the development have sold before the first home has even been built. The builders will start on new homes by summer.

“It’s not necessarily unusual, but I think it’s a testament to the location and the type of development we’re doing,” Schmitt said. “I think it’s also a sign that the real estate market is starting to come back in our direction.”

HHHunt’s Communities division has sold 40 homes in the Richmond area this year and 22 in Hampton Roads.

In addition to the Providence land, HHHunt bought 50 acres in Henrico for a $6 million development called the Townes at Woodman, which is underway.

The company announced in March that Schmitt would take over as chief executive when David Reemsnyder retires in June.