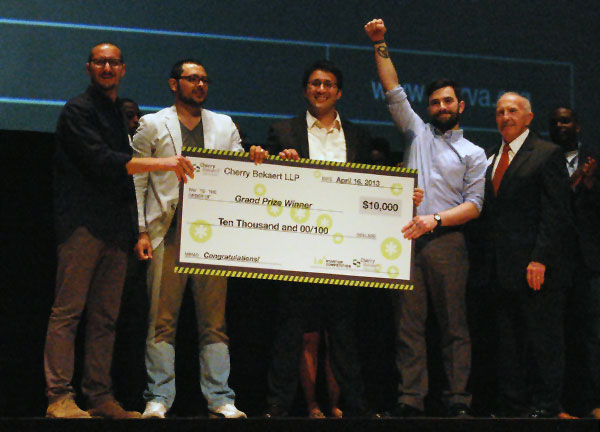 A restaurant review service that wants to take on Yelp got a $10,000 boost Tuesday.

“We’ve worked every job in the restaurant business, and we know what it takes to be successful in this industry,” said Rob Forrest, one of Speakeasy’s four co-founders. “Speakeasy is a simple but powerful tool that provides personal conversation, private feedback and public recognition.”

Co-founder Joey Figaro said four local restaurants, including Fat Dragon and 525 at the Berry Burk, already use the service. After the official launch Sunday, Figaro said, between five and seven additional restaurants will come on board.

He said the company would use the prize money to market the product and get it in the hands of more business owners.

Speakeasy was one of 13 finalists that pitched their ideas to eight judges at Richmond CenterStage. Contestants had 90 seconds to plead their cases in front of more than 600 people.

The judges, who were local entrepreneurs and investors, based their decision on the startups’ originality, creativity and likelihood of success.

Moses Foster, a judge and chief executive of West Cary Group, said Speakeasy stood out because the business could be scaled to other markets.

“We were looking for an interesting idea with a lot of originality,” Foster said. “Speakeasy attacked the idea of restaurant reviewing from a different prospective.”

DragonGrips, a business that wants to produce pedal-powered bike handle bar grips, took home the people’s choice award and a prize of $2,500.

On top of the $10,000 in seed money, Speakeasy gets six months of free office space at New Richmond Ventures and $3,500 worth of technical support from Imagine Simplicity. The prize also comes with mentoring from 804RVA.

Judges and online voters whittled the field to 14 from 105. Cyclestay, a business idea for a high-tech bike lock, dropped out the night before the finals.

To compete, the startup had to be less than one year old and willing to base its headquarters in the greater Richmond area.

Accounting firm Cherry Bekaert furnished the $10,000 prize, and First Capital Bank provided the $2,500 that went to the people’s choice award winner. Tumblr was the main sponsor of the event.

As a consumer why would I want to go on a review site that hides the bad reviews? How will I know if the place is no good? That’s the whole reason I read them.

Yelp is not just focused on restaurants, good luck!

@Brett – that’s exactly what I was wondering. I would also like to know how they filter reviews. What about giving a restaurant an average review or a positive review with some negative feedback?

Hey Guys – Rob from Speakeasy here. As we’re implementing now, this is not a tool for customers to look up reviews about restaurants. It’s about customers helping their favorite restaurants do better (and improve their own dining experience) with direct, but non-confrontational feedback. Yelp is about customer discovery. Speakeasy is about customer retention. Eventually we plan to go to a public facing site, but first we need to get this going in as many restaurants as possible. We’re participating in Restaurant Week. If you visit Bistro Bobette, Blue Goat, or La Grotta, not only can you see it for… Read more »