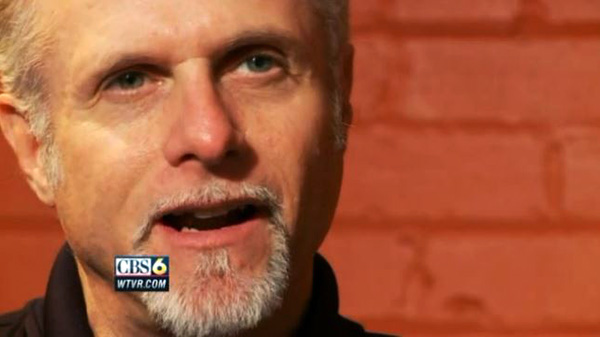 Steve Burton is shown during an interview with CBS 6. (Photo courtesy of CBS 6)

The man who dreamed up a mega sports facility in Chesterfield County has gone bankrupt.

Steve Burton, the founder and ousted head of the organization formerly known as SportsQuest, filed for Chapter 7 bankruptcy last week, with much of his debt tied to the unrealized athletic complex. 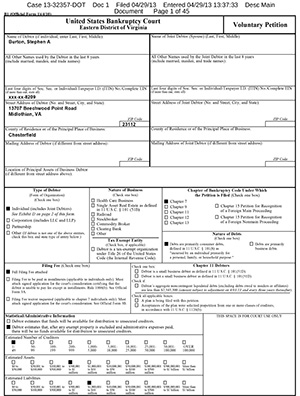 Click the image above to read the bankruptcy filing. [PDF]

He owes $621,000 to Carns Properties, which leased SportsQuest a space at 2240 Oak Lane Boulevard. He owes more than $40,000 in credit card debt, at least half of which is business-related. And there’s a debt of $821,000 to CIT Bank that Burton personally guaranteed. The filing does not specify whether the loan from CIT was related to SportsQuest.

Burton is represented in his bankruptcy proceedings by Richmond attorney Jorge Ortiz. Ortiz declined to comment on the filing.

Burton did not return several calls.

A trustee will eventually be appointed and will look to liquidate Burton’s assets in order to pay back at least a portion of what is owed to creditors. Burton’s filing lists nine creditors.

The bulk of his personal assets consist of his Midlothian home at 13707 Beechwood Point Road on the Swift Creek Reservoir.

The property was most recently assessed at $594,000, according to Chesterfield County records. There is a tax lien from the Virginia Department of Taxation on his home for $301,000, the bankruptcy filing shows.

Burton owes $283,000 to SunTrust on the home. He plans to continue making payments during the bankruptcy process, according to the filing.

Burton devised SportsQuest as a massive 250-acre facility off Route 288 and Genito Road. His plan was constantly in flux, and at one point included amateur and professional sports teams and accompanying facilities, a TV partnership, and a performance venue for musicians.

For more than two years, he promoted his vision, and some elements came to fruition: Twelve turf fields were built. At one point, SportsQuest had an arena football team. And Burton’s plan evolved to include a pricey sports-training boarding school that did attract a few students.

But the venture racked up debt, left bills and employees unpaid, and did not progress beyond the turf fields.

About 120 acres of SportsQuest’s land was eventually taken through foreclosure by Shaw Sportexe, the turf company that installed the turf at the fields and was also the organization’s largest lender.

The fields have been rebranded as River City Sportsplex and remain under Shaw’s ownership.

SportsQuest LLC, the main entity behind the organization, filed for Chapter 7 bankruptcy in August with more than $7 million in debt and little more than office equipment as its assets. The trustee eventually asked to relinquish the case after he was unable to locate any money or property that could be used to pay SportsQuest creditors.

Dudley Duncan, who took over SportsQuest after Burton’s ousting in April 2012 and steered its winding down in bankruptcy, declined to comment on Burton’s personal filing.

Neil Carns of Carns Properties said he is still owed the money from Burton despite a judgment for the unpaid rent ordered last year in Chesterfield County Circuit Court.

Assets from Burton’s bank accounts and a retirement account were tied up as a result of that judgment. But Carns and Burton’s other creditors must now wait to see whether any proceeds might be recouped from the personal filing.

Burton’s bankruptcy filing shows that he has returned to his former career in sleep diagnostic research. Burton previously started a sleep research device company that went out of business and left investors on the hook for millions.

He’s making $6,000 a month as a consultant for an Illinois-based sleep testing medical device, according to his bankruptcy filing.

So are you saying the whole SportsQuest experiment didn’t go as Burton planned?

I’ve often wondered if all those who bought SportsQuest shares (often done when businesses folded into SportsQuest) would start looking at securities law claims against Burton personally. With this bankruptcy filing, that door will close soon, and with all the financial disclosures the filing provides, now people will probably wonder whether such suits would be worthwhile in any event.

It’s unfortunate when any entrepreneur who takes a risk fails. They put time and money into an idea that hopefully will create jobs and tax revenue ( I doubt many of them are $ 250 M start ups though). I just have a hard time understanding how many of our local leaders actually bought into such a vision. In 2008 I saw Mr. Burton introduce his product to a crowd parents at Tomahawk Creek Middle School. He actually said he planned on having former Olympians like Michael Phelps working at SportsQuest to park cars. If a regular guy like myself… Read more »