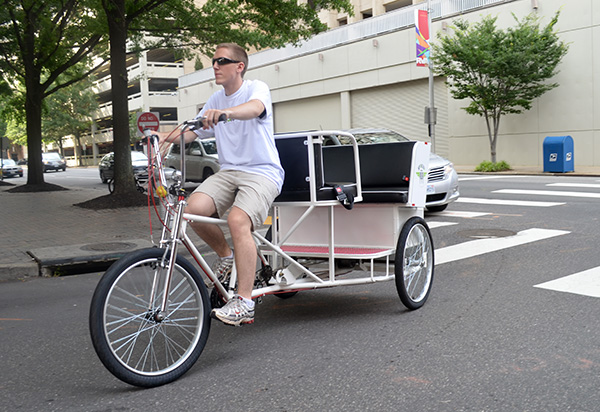 Spoken4’s pedicabs can handle up to five passengers. (Photos by Mark Robinson)

A local startup is trying to pedal its way into the Richmond transportation scene.

Wednesday marked the debut of Spoken4, a company with a fleet of five pedicabs — pedal-powered rickshaws that can carry up to five passengers apiece — that will run from Carytown to Shockoe Bottom, as far north as the Diamond and as far south as Byrd Park.

Katie Hurst and Kyle Langemeier co-founded the business out of their Byrd Park home. Frequent trips to Charleston, S.C., turned them on to the idea, said Hurst, a Richmond native. 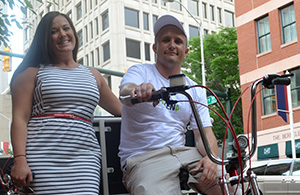 “Richmond has always had such a history of being a bike-friendly city,” she said. “There’s just so much discussion about bikes that we feel like it’s a good time for us to start.”

Spoken4 has hired 10 drivers. Langemeier, a 31-year-old VCU graduate, will also work as a driver. Hurst, 26, will handle the dispatching and marketing side of the business, she said.

“We’re excited to be able to provide jobs to people who were in the same situation that Kyle was in, where they can’t find a part-time job or a job out of school,” she said.

A call, text or tweet can summon the cabs, and drivers will accept cash or credit. Rides will cost either $7 or $14 per person, depending on the distance traveled. The company will target young professionals traveling to and from restaurants and bars, Hurst said.

Hurst said she thinks the service can average 50 rides a night in the beginning.

Spoken4 will compete with numerous taxi companies, the bus line and the nonprofit To the Bottom and Back bus service.

It also will face an obstacle in the weather, as the cabs won’t run if it’s raining, Hurst said. When winter comes, Hurst said they plan to scale back the service.

As an additional source of revenue, the business will look to sell ad space on the back of the pedicabs, Hurst said.

They hope to expand the fleet of bikes and eventually jump to other cities, she said. But first, Hurst says she just wants Richmonders to give pedicabs a chance.

“Until you actually sit in one of the bikes and get driven around, you don’t actually have the full experience,” Hurst said. 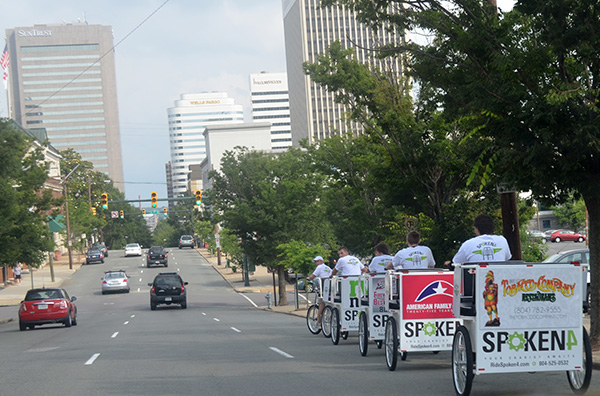 The company launched with five pedicabs and hopes to expand its fleet.

What a great idea! Really cool and should be a lot of fun as well.

LIKE. Less pollution, more fun. I only wish I was cool enough to be on the town often enough to make use of Spoken4!

It would have benefited this article to include the fact that this is not the first rickshaw business in Richmond. River City Rickshaw operated from about 2003-2007? in the downtown area.

Cant help but notice, those are some wide vehicles but no rear view mirrors?

This is such a cool idea! I hope it works out in Richmond. We all need to be more conscious of our environment and this is a great way to get around without polluting. Love it!

I can’t help but think…five passengers going up the hill from Shockoe Bottom. Some strong pedal power required, for sure.

River City Rickshaw was a great idea (also brought from Charleston) and was initially successful. But the novelty wore off and when the weather changed the business model just wasn’t profitable. I wish these guys the best of luck.