Linger Rose is best known for its selection of designer purses. (Images courtesy of Linger Rose)

Linger Rose, an online store that peddles a selection of designer purses, has leased a storefront at 2709 E. Marshall St. The store is a branch of KL Fashions Corp., owned by Richmond-based parent company Edison Group.

“The experiment is that we take a store that should be in Carytown and put it in a historic district,” said Rae Faye, KL Fashions’ vice president of merchandising.

Faye, a 26-year-old Richmond resident, said the storefront will be KL Fashions’ first. It owns four other online retailers: Loving Lemons, Babies in a Barrel, Pet and Linger Rose Home. 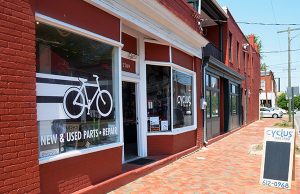 The company will renovate the 900-square-foot space in September and expects to open by mid-October, Faye said.

Linger Rose will take over the space from Cyclus Bike Shop. Cyclus’s lease is ending, and the store will look for a new location when its doors close in August, according to owner Brett Eastman.

“The thing about Richmond women is that you have such a broad range … so many women of all different ages, and what they all have in common is that they all work hard and they all want something special to treat themselves,” Faye said.

Through promotional deals and “best offer” policies, Faye said the store would try to compete with such larger retail chains as Nordstrom and Macy’s. It will also face local competition from shops such as Phoenix in Carytown.

Linger Rose will be the latest addition to the growing Church Hill retail and restaurant scene. It joins recent additions including Era Vintage, Dutch & Co. and Sub Rosa Bakery.

Faye is optimistic about the store’s opening but says its success will likely lie in the hands of Church Hill residents.

“It’ll really come down to whether the neighborhood accepts us or not,” she said.