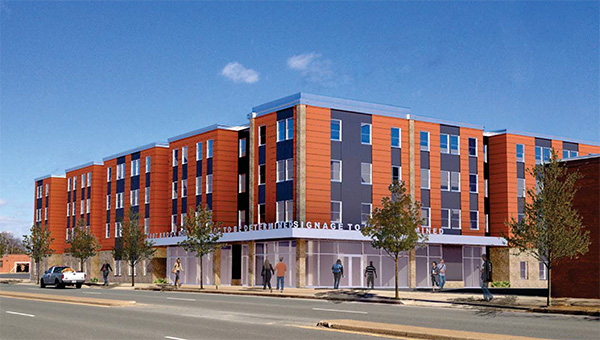 A rendering of the proposed building at 2007 Brook Road. (Courtesy of Lombardy VU Realty)

A year after scrapping plans for a $5 million student housing project near Virginia Union University, a developer is moving down the road and doubling his investment.

Willie Lanier Jr., acting as Lombardy VU Realty, has plans for an $11.5 million, 103-unit student housing project at the corner of Brook Road and Roberts Street – across the road from the VUU football field and a block away from a 33-unit plan he proposed at 2300 Lombardy St. in 2012.

“He originally started with that project,” said Jennifer Mullen, a Roth Doner Jackson attorney representing Lanier. “As we worked through the process … the feedback that we received on that site actually pointed to the site where we are seeking our current special-use permit.”

The Richmond Planning Commission voted unanimously Monday to recommend approval of a special-use permit for the property. The project is set to go before the Richmond City Council on July 22.

The lot is owned by W Brook Road LLC, according to city records. Lombardy VU is under contract to purchase the property, Mullen said. Construction is slated to begin as soon as zoning is in place and finish in late summer 2014.

Units will range from studios to three-bedroom apartments and average about 875 square feet, Mullen said. Rent per unit will start at $800 and top out at $1,650, and units with multiple bedrooms might have separate leases for each occupant.

Baltimore-based Grant Architects designed the project, and Richmond-based Branch & Associates will be the general contractor. The project will be financed using Virginia Housing Development Association taxable bonds, although no firm commitment is in place.

Mullen said the project would be a catalyst for development in the Brook Road corridor.

“This use will provide a good transition between the existing industrial, commercial and residential on the east side of Brook Road and the university use on the west side,” she said.

Great plan and a good location has been accepted. This should help support the needs of the students at Virginia Union.