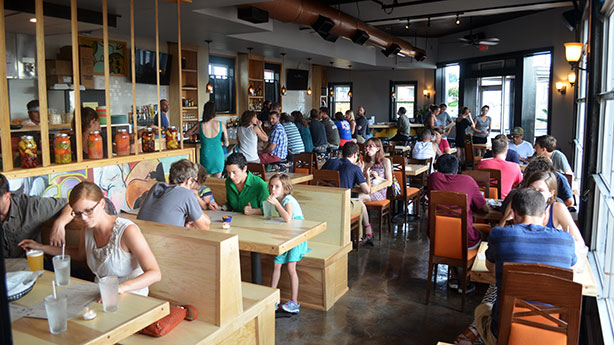 North Boulevard’s newest restaurant is up and running.

Owners Randy O’Dell and Patrick Stamper, who also own BellyTimber Tavern in the Fan, began work on the taquería’s 1,300 square-foot space in January 2012. The most obvious addition is the deck, which adds more than 300 square feet to the eatery.

Lion’s Paw Development purchased the property in late 2011 for $225,000. Developer Charlie Diradour gutted the space and made renovations totaling about $350,000, he said.

En Su Boca is the latest in a string of summer restaurant openings: Both the Daily Kitchen & Bar in Carytown and the Viceroy in the Museum District opened this month.

It looks a lot more spacious than I imagined it would. Will certainly have to check it out!

The Boka truck guy has been around Richmond for a couple years, and there really wasn’t anything comparable to his thing in the area to my knowledge. The guy specializes in tacos, and calls his place “Boka” with a subtitle that starts with “For your mouf”. There are other Mexican-style places, but none with a whole Taco-specific thing going on, and none with any similar name. So some other guys start up a place that specializes in tacos. There are several hundred thousand Spanish words to choose from, and several billion combinations they could call their place, but they don’t.… Read more »