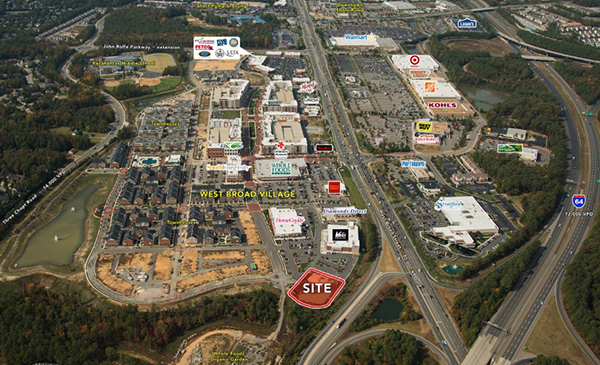 An aerial of the future site of Richmond’s first Golfsmith. (Images courtesy of NAI Eagle)

Located to the east of REI on one of the last remaining commercial sites at the mixed-use development, the store will be the Austin, Tex.-based chain’s first in the Richmond market. That’s a fact not lost on Ricky Core, principal at Markel | Eagle.

“It’s another of the many firsts for Richmond at West Broad Village,” Core said. The 161-acre development was the first to attract a Whole Foods and an REI to Richmond.

A rendering of the planned store.

Site work will begin this month, with full-on construction to come in about a month, Core said. Eagle Commercial Construction, which along with Markel | Eagle is part of the Eagle Companies, will be the builder. Richmond-based Freeman Morgan Architects is designing the project.

Core said Golfsmith signed a long-term lease in excess of 10 years. It will aim to have the store open in time for the Master’s golf tournament next year.

The land is owned by Markel | Eagle Partners Fund I. It acquired the property when it helped bail West Broad Village out of trouble in late 2009.

The parcel is one of the few commercial pieces at the development not owned by Excel Trust. The San Diego REIT bought much of West Broad Village from its original developer, Unicorp, in a $161 million deal late last year.

Markel | Eagle still owns about 5.5 acres next to the I-64 ramp where Whole Foods has an organic garden. That land is slated for future commercial development.

Golfsmith was founded in 1967 and has about 150 stores, including five in Northern Virginia.

NAI Eagle’s Harrison Hall said the chain had its eye on Richmond for some time.

“Golfsmith has been contemplating a number of other sites in Short Pump,” Hall said. “Markel Eagle had this great site, so we were actively looking for the right fit.”

Steven Maulden, Golfsmith’s director of real estate, did not return a call by press time.

As if the area isn’t a complete traffic nightmare already…

Calm down Nick – the traffic isn’t even bad around Short Pump. This is extremely great news. What a great addition to a great development!

“the traffic isn’t even bad around Short Pump”

Really, the traffic is NOT bad in Short Pump. I live in NOVA and I drove through Short Pump today…that is NOT bad traffic. The traffic flowed nicely today and had no trouble getting around. It was busy with quite a few cars, but it wasn’t bad. Come north, then you’ll understand what bad traffic is all about. As for you all in Richmond, I don’t want to hear any whining!

No problem except it looks like a freaking Bed Bath and Beyond….I hate strip mall architecture.

As a golfer this is great news.