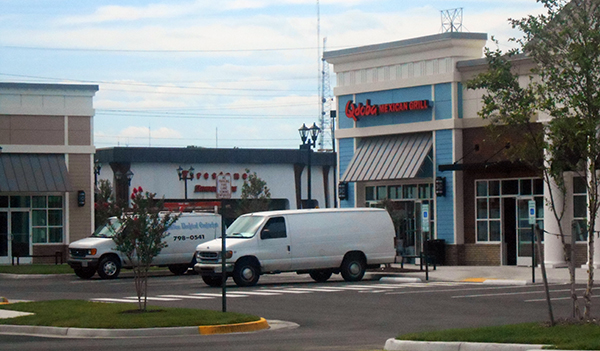 The existing commercial section at Stonebridge. (Photos by Burl Rolett)

Plans for a 600-unit apartment complex are moving along at the Stonebridge development, as Virginia-beach based Boyd Homes in July closed on the purchase of almost 17 acres of undeveloped land where the Southside mall once stood.

Boyd Homes paid $3.45 million for the property, according to Chesterfield County records. It plans to spend $60 million on the project and aims to have the apartments open next year. 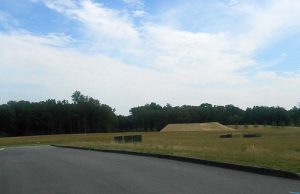 The site of the planned apartments.

“We think the location is really great in terms of access to transportation and ease of access to all of Southside and downtown Richmond,” Boyd president David Rudiger said. “We’re pretty excited about the revitalization of the Cloverleaf area, and we think that the Stonebridge project as a whole is really going to be exciting.”

The apartment complex, dubbed Element at Stonebridge, will include studios and one- and two-bedroom units. Rents have yet to be determined. Amenities will include a pool, clubhouse and fitness center, Rudiger said.

The project will be the first residential piece at Stonebridge, a redevelopment project at the former site of Cloverleaf Mall. The mall closed in 2008 and was demolished three years later. An overhaul at the site near Chippenham Parkway has been on the drawing board for much longer, however.

“The overall Stonebridge revitalization has been in the works for probably eight or nine years,” Chesterfield County senior planner Beth Sykes said. “It’s just a very long process for such a huge project.”

Stonebridge’s first catch was the Kroger Marketplace, which opened in December 2012. The development has signed a cluster of smaller retail tenants, including Qdoba, Subway, Sweet Frog, Sleepy’s Mattress and an ABC store. A Krispy Kreme is on the way at an outparcel that fronts Midlothian Turnpike.

Connie Jordan Nielsen of Cushman & Wakefield | Thalhimer is in charge of leasing Stonebridge’s commercial space. She said she has about 90 percent of the roughly 36,000 square feet of commercial space leased. Rates at Stonebridge are $32 per square foot, which Nielsen said is comparable to commercial rent numbers in Short Pump. 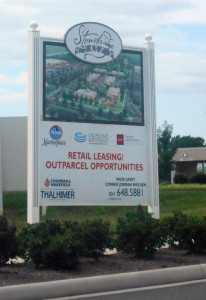 A second commercial portion is in the works.

“The density of the office that’s surrounding [Stonebridge], along with the backup of the hospital that’s there, really feeds the daytime population,” she said. “What we’re seeing from the retailers is they feel like it’s underserved, so this is the preeminent project there.”

Nielsen is courting an anchor tenant for a forthcoming second phase of commercial development at Stonebridge, which would add about 150,000 square feet of space.

Crosland Southeast is the master developer for the mixed-use center. Crosland partner James Downs said there isn’t a firm date for starting up the second phase of the development.

“We can only do what that market will allow us to do, and we’re working diligently to put that phase into production as soon as possible,” he said.

Boyd Homes gave Chesterfield’s planning commission its first site plan for Element at Stonebridge in May. The Virginia Beach builder will be the project’s general contractor, and Dallas-based Humphreys & Partners are the architects on the job.

Although he hopes to open the apartments next year, Rudiger has yet to set a target date for breaking ground.

“That’s always a difficult timetable to predict, but we own the land now, and we have every incentive to move forward as quickly as possible,” he said.

It will be interesting to see how well the community is doing in 5 years. And I really wish they had built a REAL Kroger Marketplace. The new store in VA Beach (like most Marketplace stores) sells, clothes for men and women, electronics, has a HUGE toy department, a full jewerly store aka like a Wal-mart. This is just a Kroger store with an expanded drug store along with an isle of liens and furniture.