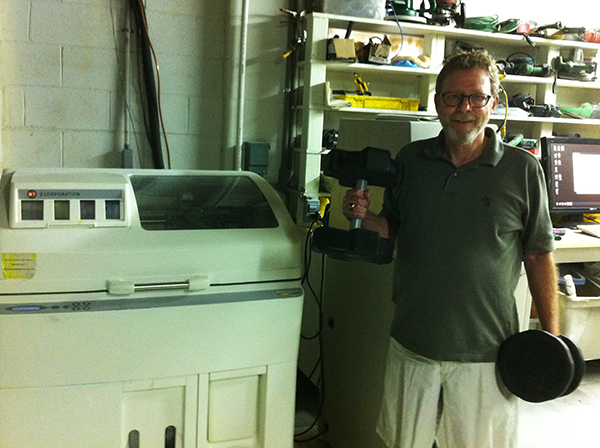 Now the 61-year-old Bon Air resident is crunching out another idea.

The inventions include a dumbbell with an X-shaped design and a weight plate that has a series of circular spaces for better gripping.

Davies cited safety and appearance as the mothers of his inventions. He sought to design a barbell that looks good and won’t roll like traditional round barbells. 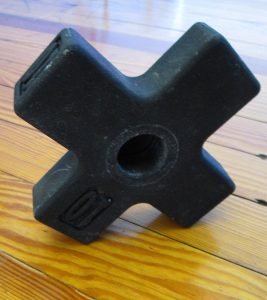 “Most weights look like slices of bologna, but this is a fashion business,” he said. “When you go into a club, you notice the color scheme.”

As he has with some of his past inventions, Davies will look to pitch and license the products to fitness companies. A division of Russian and American company Foreman Fitness, for example, manufactures and sells various Davies-designed weight lifting plates.

Generally, Davies licenses his patent designs to a company and receives royalties that range from one to 10 cents per pound. Weights are shipped in containers that weigh about 38,000 pounds. Davies expects to move 50 to 100 containers in 2013.

Davies’s career as an inventor began 17 years ago, when he was working as a manufacturer’s representative for a Beltsville, Md.-based company. Inspiration struck in karate class. He arranged a weight plate, broom handle and towel in a way that helped stretch his back and legs. Med X now manufactures that idea as the Super Stretch.

After years of intermittent design work, a trip to a Chicago fitness show in 2003 got his invention juices flowing again.

“I showed some company representatives my drawings, and they encouraged me to further develop my ideas,” he said. “It kind of kicked me up a gear, and I started working more aggressively on some ideas.”

A 2007 trip to a weight factory in China, gave Davies new insights into the process of weight production.

Davies received three patents that year but said he paid for it in the process. At the time, didn’t know how to use computer-aided design software, so he had to hire engineers to formalize his drawings. That can run anywhere from $1,000 to $5,000, he said.

He enrolled in John Tyler Community College to learn computer-aided design, launched Atlas Barbell and continued applying for patents. It took about $5,000 to start the company, Davies said.

Eventually eliminating yet another middleman, he built his own high-powered server and invested $60,000 in a 3D printer that turns his designs into real-life product samples.

From the basement of his Bon Air home, it takes Davies about six months to turn his light-bulb moments into light weights. The only outside help he calls on is from Reston-based Witham, Curtis, Christofferson & Cook to interpret patent office jargon and file patent applications at a flat rate of $1,000.

“The patent office can send back your drawings if they don’t like something about them, and it can be very difficult, not working with their legalese every day, to fully comprehend all the changes you need,” Davies said.

The application process can take one to three years until the patent is issued, Davies said.

In addition to his 10 issued patents, Davies has 6 patents pending and likely won’t stop there.

“I’m one of those guys that gets a lot of ideas and doesn’t just want to make money. If I can’t improve the product, I don’t want to mess with it,” Davies said. “I plan on continuing in my little rut as long as my health is willing.”

It is rare to catch a glimpse behind the thought process of an inventor. The lightbulb moment that David Davies had seventeen years ago was kept bright by his hard wok and dedication. Michael Thompson eloquently captures the struggle of a creative man trying to navigate the often unfriendly confines of business start-up. The world not only needs more dreamers, we need more individuals, like David Davies, who fight for their dreams. Well done!